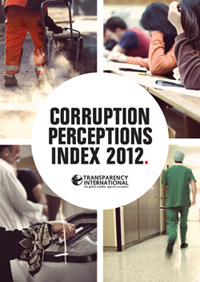 Transparency International (TI) has released today the latest version of its Corruption Perceptions Index (CPI), which assesses 176 countries and territories based on how corrupt their public sector is perceived to be. Each country receives a score in a scale from 0 (high corruption) to 100 (low corruption) and a rank comparing its position to the other countries assessed. This year’s results show that corruption continues to be a severe problem in most countries, with two thirds of them scoring below 50.

According to the 2012 index, Denmark, Finland and New Zealand are at the top, with a score of 90. A central reason for this positive assessment lies on the fact that these countries have well-established government institutions and strong law enforcement. Nevertheless, not even the countries perceived as least corrupt in the world are immune to corruption and some studies have pointed out vulnerabilities, especially in the relationship between politics and business.

At the very bottom are Afghanistan, North Korea and Somalia, similarly to previous editions. Some interesting, though pessimistic developments refer to the consequences of the financial crisis in Europe and of the Arab Spring in the Middle East. The countries most affected by the crisis in the Eurozone have underperformed based on their ranks this year, and the countries that underwent revolutions in the Arab World also experienced either stagnation or deterioration in their ranks.

Another important aspect related to the 2012 CPI is a significant methodological change with regards to previous editions. The main improvement this year is that the index will from now on provide for an assessment of country trends over time based on each country’s score, which was not possible with data from earlier editions. This is because the index was earlier composed using the ranks of each country in a series of business and expert-based surveys conducted by other organisations. In the new methodology, on the other hand, TI uses the raw scores of each country from the same sources, thereby allowing analysts to better assess changes over time. Nevertheless, the organisation highlights that this comparability will only pertain to the data starting from this year onwards, and the change in scale from 0-10 to 0-100 was also a decision to strengthen the distinction between the old and new methodologies.

More information on the 2012 CPI can be found on transparency.org.