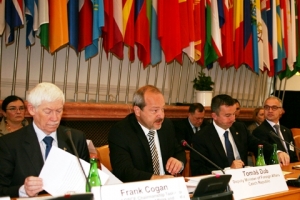 The 20th Economic and Environmental Forum of the Organisation for Security and Co-operation in Europe, focusing on “Promoting Security and Stability through Good Governance“, held its concluding meeting in Prague on 12-14 September 2012. Following the results of two preparatory meetings, which addressed the topics “Anti-Money Laundering and Countering the Financing of Terrorism” and “Promoting Good Governance and Combating Corruption in Support of Socio-Economic Development“, the third and final meeting of the Forum examined the level of implementation of OSCE commitments in preventing and countering corruption. The meeting had the participation of over 250 representatives of national and international institutions, NGOs, the business community and academia, including ERCAS Director Prof. Alina Mungiu-Pippidi, who moderated the panel entitled “Strengthening civil society and media engagement in support of good governance, integrity and transparency”.

Opening speeches by Brian Hayes, Minister of State at the Department of Finance of Ireland (OSCE Chairmanship) and Tomáš Dub, Deputy Foreign Minister of Czech Republic, highlighted the negative impact of corruption on institutions and economic development, the importance of transparency and accountability, and the commitment of OSCE to help build up political will for reforms promoting good governance. Mr. Hayes also emphasised the role of private sector, free media and civil society organisations in strengthening good governance.

The different sessions of the event engaged participants in discussions on the challenges OSCE participating States are facing in promoting good governance, and how these challenges can be addressed both domestically and at the international level. Among the topics addressed was a review of the implementation of OSCE commitments in the area of good governance, presented by Ms. Gretta Fenner, from the Basel Institute on Governance, and complemented by presentations on the review process of the United Nations Convention against Corruption (UNCAC) and the EU anti-corruption policy.

The panel moderated by Prof. Mungiu-Pippidi focused on the importance of civil society, private sector and media participation in the fight against corruption. Panellists called attention to the relevance of transparency and access to information (i.e. through e-government, organising public meetings or hearings, introducing grievance mechanisms etc.), education and training as pre-requisites for the development of a well informed and engaged civil society. They also highlighted the importance of partnerships between public sector and civil society organisations as a means of generating increased interaction and facilitating external control and monitoring.

The discussions aimed at renewing and deepening OSCE’s political engagement in the area of anti-corruption and good governance, and its support for the fulfilment of the commitments undertaken by the 56 OSCE participating States. The results of the Forum will be further discussed at the next OSCE Ministerial Council meeting at the end of the year.

The picture shown above is from osce.org.