Alina Mungiu-Pippidi presented the main findings of her book which is based on years of research and evaluations of the international community’s efforts to curb corruption globally. Mungiu-Pippidi explained how she approached the question of how to control corruption through a historical lens, by trying to understand how countries managed to break the vicious cycle of patrimonialism to reach a governance norm of ethical universalism. In doing so she looked at historical and contemporary achievers to understand how these processes worked in those contexts. Mungiu-Pippidi highlighted that many lessons are to be learned from countries that managed to establish a governance order based on ethical universalism.

To the panelists, who were generally impressed by Mungiu-Pippidi’s findings, some parts of the book raised questions. Gunnar Folke Schuppert asked about the relationship between the formal and informal institutions in countries on the path to good governance. He wondered: how do these informal instituions, the rules of the game, change when we try and tackle corruption? Mungiu-Pippidi explained that, naturally, informal institutions will always exist, which is why her approach looks at governance regimes, rather than just political regimes. These are much harder to change and take a more comprehensive approach. Janine R. Wedel highlighted that to her the strength of the book is that it looks not only at institutions and their reform, but also at how corruption operates in a specific environment and how we need contextual choices for anticorruption. She stressed Mungiu-Pippidi’s argument that corruption is not a deviation from a norm, but in itself defines a governance system with its formal and informal rules. In some ways “The Quest for Good Governance” evn caused some frustrations, as Finn Heinrich, Research Director at Transparency International, pointed out:

“Reading the book was really a roller-coaster. I’ve been with TI [Transparency International] for 7/8 years now and some of key frustrations where linked to the question of why countries are not showing significant progress. We need to have some success cases. The positive side of the roller-coaster was that reading your book I understood: it’s an equilibrium – it’s not about incremental progress, but much more deep seated. It’s about really fundamental changes and revolutions. That got me excited. The downslide of the roller-coaster was to realize that this is easy to implement. You can’t just come up with new institutions. Anti-corruption is about domestic political forces and long term change. I ended up also being a bit frustrated about the lack of easy fixes, yet, it made a lot of sense to me I really encourage you to read the book. It touches upon all the key issues of corruption: It looks at measurement, theory, at policy; it uses quantitative methods, but also process tracing tools. It’s really a tour de force on various things and, while you might not agree with all of its conclusions, it really is a textbook even though it’s not a textbook on corruption.”

The audience brought together many representatives of the Berlin based anti-corruption community. Representatives of NGOs and government institutions were joined by professors and university students, who engaged in a discussion of the questions raised by Mungiu-Pippidi’s book. One of the members of the audience was Hans-Dieter Klingemann who explained to us what he thought about the book: 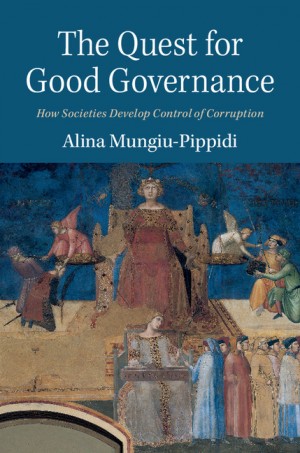 “What I was impressed by was the historical depth and the combination of various methods, from court case analysis to survey data and econometrics. You really had the impression to get a comprehensive picture. What I was also impressed by was the refusal to give easy and simple answers. This is not a cookbook; it’s a book to think about very specific cases and come up with very specific solutions.”

This event was the third in a series of events in which Alina Mungiu-Pippidi promotes her book. Earlier this month she presented it at two occasions in London, at the School of Slavonic and East European Studies at University College London and at the Legatum Institute. Later this month and in March Mungiu-Pippidi will be travelling to the East Coast of the United States to present her book at Columbia University, the World Bank, the Woodrow Wilson International Center and the Harvard Kennedy School of Governance.

If you didn’t get a chance to read it yet, order The Quest for Good Governance:  How Societies Build Control of Corruption by Alina Mungiu-Pippidi, published by Cambridge University Press here.