Assessments of corruption on a cross-national level have represented an important focus of research in the field of anti-corruption in recent years. With the aims of tackling the challenging task of quantifying corruption and improving comparability across countries, the development of cross-national corruption indicators has enabled the ranking of countries from the least to the most corrupt, and thereby has given civil society organisations and media an important tool to name and shame governments and exert some pressure for anti-corruption in the policy sphere as well. However, despite advances in estimating corruption levels in a country at a certain point in time, existing scholarship still knows little about how these levels may change over time, and what causes may be behind such movements. Seeking to make a contribution to this academic debate, a recent report prepared by the ERCAS team at the Hertie School of Governance as part of the ANTICORRP research project has examined global corruption trends in eight regions of the globe, pointing out best and worst performers and positive and negative developments in each of them.

Building upon one of the few consistent time-series of corruption indicators, namely the Control of Corruption indicator developed by the World Bank as part of the Worldwide Governance Indicators, the report first compares the average control of corruption score across the following regions: Asia and the Pacific, Eastern Europe and the Baltics, Former Soviet Union, Latin America, the Caribbean, Middle East and North Africa, Sub-Saharan Africa, and Western Europe, North America and Oceania. From this analysis, the latter emerges as the clear front-runner in control of corruption, followed by the Caribbean islands and Eastern European countries. At the other extreme, Sub-Saharan Africa and the Former Soviet Union present the lowest average scores among all eight regions. Considering a 15-year time span covered by the indicator, published for the first time in 1996, the assessment also shows that no single regional average has seen a significant statistical change during this period. 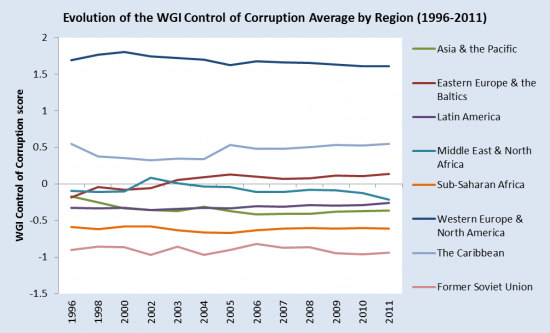 Nevertheless, a closer look country by country shows that significant change, both positive and negative, has taken place in about one fourth of the sample covered in the analysis. Out of these, 21 countries present significant improvement in control of corruption, whereas 27 show significant deterioration. In some regions, some of the best performers have managed to improve control of corruption even further in the past 15 years. This includes, for instance, Japan in Asia, Uruguay in Latin America, and Estonia in Eastern Europe. Similarly, some countries that were already at the bottom in their respective regions continued to further deteriorate. This was the case of Libya, in the Middle East and North Africa region, and Greece, in Western Europe. But most interesting are the cases of countries that have managed to achieve not only a statistically significant improvement, but also one of relatively large magnitude. Rwanda, Georgia and Liberia, for instance, have had their scores in the control of corruption indicator increase well over one point in a five-point scale – the World Bank indicator ranges from -2.5 to 2.5. It is true that Georgia and Liberia ranked very low in 1996, but at the same time, these and other countries with a similar trajectory make a case for the possibility of considerable improvement in a relatively short time horizon, when it comes to substantively changing a country’s governance regime.

What explains such positive developments? Previous research conducted by ERCAS  suggests that it is difficult to pin down common causes for such diverse cases. In fact, improvements in control of corruption often seem to be not the fruit of a common path, but rather of country-specific dynamics where contextual conditions play an important role. For this reason, this global trends report goes beyond the comparison across countries at the global level and takes a regional approach to highlight regional positive outliers that are worth studying in order to shed more light on the historical and social changes that contribute to the achievement of good governance. The causes for such success stories will be the subject of future single-case studies in the scope of the ANTICORRP project.