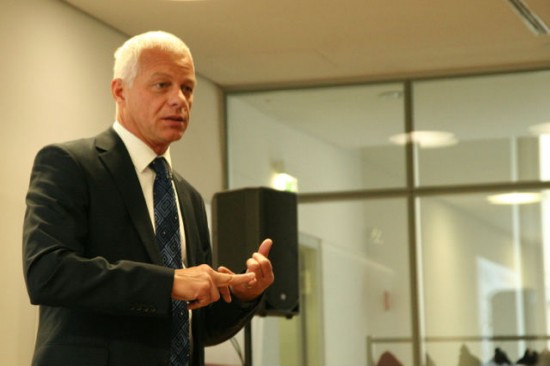 In order for a country to successfully change its governance, civil society has to also want and invest in that change. But what do you do when a country is so aid dependent that people ask to be paid to improve their own lives? Speaking to a general policy audience at Berlin’s Hertie School, Drago Kos, Head of the Independent Joint Anti-Corruption Monitoring and Evaluation Committee (MEC) in Afghanistan, described his efforts to enroll NGOs, youth, local communities and even mullahs to this effort.

During his lecture, chaired by ERCAS director Professor Alina Mungiu-Pippidi, Kos described the challenges in combating corrupt practices in Afghanistan. The country, beleaguered for centuries by war, finds itself on the eve of an important presidential election and practically paralyzed by corruption. Next year foreign troops will leave the country, and with them, a considerable amount of foreign aid which is currently sustaining much civil infrastructure. 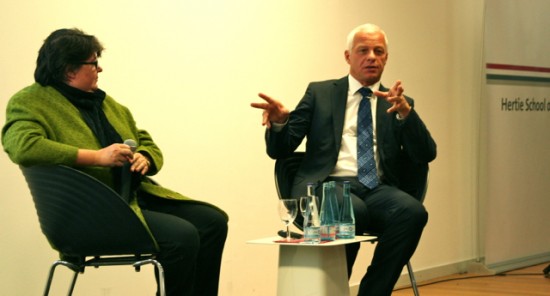 Basic bureaucratic processes in the country are encumbered with mid-level officials expecting to be paid for their services. University hopefuls must follow 23 official steps to obtain a university degree. Dreaming of building a house? You will have to persevere through 497 different stages to accomplish this. One minister complained of receiving upwards of 15,000 requests from MPs for favouritism for their relatives or tribesmen in filling official posts. In exchange for boldly sticking his neck out, the minister was replaced by one who now obligingly looks the other way.

While he admits it is an uphill battle, Kos stressed that it was not a lost cause, “Is it hopeless? No, it’s not hopeless. If it was, I wouldn’t go back.” However, to make the step-change to a more accountable and transparent form of governance, Kos concluded by stressing the importance of using civil society groups and engaging younger Afghans.

Drago Kos is an established international anti-corruption expert and serves on the advisory board of ANTICORRP. He was the chairman of the Council of Europe’s Group of States Against Corruption (GRECO) and the first chairman of the Prevention of Corruption in the Republic of Slovenia. He is set to head the OECD Working Group on Bribery starting in 2014.