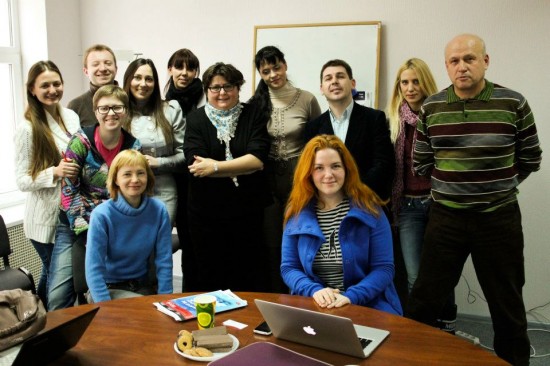 Most news from Ukraine these days are about football, shadowing everything else. But football will soon be gone, with the pleasant memory of Ukrainian’s national team victory, and problems will remain. Corruption has been Ukraine’s paramount problem ever since the fall of Communism – probably before as well. A new coalition of civil society organizations is working to build a political integrity campaign prior to the next parliamentary elections in Ukraine, to take place in October, 2012. The civic movement, called CHESNO (from Ukrainian: ‘honestly’), was founded by a group of organizations together with the already existing network “New citizen” Partnership with the aim of strengthening and empowering Ukrainian civil society with information tools to improve citizens’ knowledge about candidates and enable voters to choose their candidates better.

The movement was launched on October 29, 2011 with the event «Let’s filter the Parliament in 24 hours». CHESNO activists have established a list of six integrity criteria, based on which candidates are classified as more or less apt to take public office and represent their constituency:

The objective of this assessment is to inform voters about which candidates are unsuitable from an integrity perspective. The idea of “cleaning up” Parliament is embodied in CHESNO’s campaign symbol: garlic, which represents the cure and an effective weapon to ward off evil.

Representatives of the movement have also sought to exchange experiences with activists from other countries where similar campaigns have been successfully implemented. In January, 2012 Prof. Alina Mungiu-Pippidi was invited to Kiev to share the Romanian experience with the campaign “Coalition for a Clean Parliament”, a successful project that has already been replicated in a number of countries in South Eastern Europe.

The movement is based on a complex decentralized structure and division of tasks among the participating organizations. With support from the “New Citizen” Partnership, one central and 25 regional coordination councils have been set up to control the movement’s operations, and the activities are being carried out by the “New Citizen” coalition representatives according to established responsibilities for particular areas of work. Among the movement’s ambitious goals are the creation of a regional network of coordination centers, the collection and analysis of information about candidates and the implementation of advocacy campaigns. CHESNO also intends to form and train a group of civic volunteers to help with the activities.

During the first stage of the campaign, participants have held regional presentations and crosschecked 450 current MPs on whether they conform to the criteria or not. Based on the results of this preliminary analysis, CHESNO’s representatives have also contacted political parties demanding that politicians already identified as unsuitable should not be included into the upcoming elections lists.

The movement’s activities will soon reach a second key stage with the start of the electoral campaign in July 2012. This stage will entail the assessment of selected candidates with assistance of experts and analysts. Forecasts estimate that about 4000 candidates will run in the next elections; based on these figures, CHESNO aims at assessing the first 100 candidates from the lists of parties most likely to overcome the 5% threshold, as well as the first 7 majoritarian candidates in the election districts, according to expert polls within each region. The results of this analysis will be summarized in the “CHESNOmeter”, a candidate integrity barometer, which will be created and disseminated by participating organizations later on.

Some of the participating organizations are listed below:

The Institute of Mass Information

Committee of Voters of Ukraine

Center of Political Studies and Analysis

Antiraider Union of Entrepreneurs of Ukraine