With these discussions as a background, the report first looks at the evolution of control of corruption, based on the indicator published by the World Bank as part of the Worldwide Governance Indicators, for the period 1996-2011, taking into account four income groups: low, lower-middle, upper-middle and high income. This analysis yields interesting results, showing that the average control of corruption score of all four income groups has decreased in the period considered, but appears to have decreased more strongly in the case of upper-middle and high income groups. At the same time, we see that the number of countries in the sample that belong to these two groups has steadily increased in the same time period, from 27 to 52 in the upper-middle category and from 40 to 56 in the high income category.

A more detailed analysis of the countries that have acceded to these groups in the past 15 years reveals that their joining the “club” of richer countries has likely contributed to pulling the control of corruption averages down in both groups, as these new-comers do not have the same high governance standards observed in other rich countries. This means that these countries are actually becoming richer faster than they are improving governance structures towards universalism and impartiality. Although this may be interpreted as evidence that relatively poor governance does not seem to completely hinder development, it is important to highlight that the majority of countries that moved up to the high income group already ranked in the top tercile of control of corruption in 1996, suggesting that, although there is still room for improvement in their governance structures, a certain level of pre-existing good institutions may have contributed to, or even been necessary for, their further economic development.

Additionally, an analysis of trends of per capita income by region shows that Western Europe and North America, the best-performing region in control of corruption, has grown at a faster pace despite having an already high average income, and at least until 2008, when the financial crisis started, this region managed to outpace average accumulated growth in Asia, Latin America, Middle East and North Africa and the Caribbean. This in turn suggests that some growth potential may be realised only in contexts with stronger control of corruption.

The residuals for each country are then calculated to show those that are doing better or worse that what their level of development would predict. For most regions, the best performers are also the countries that have the highest positive residuals, that is, whose control of corruption scores are higher than what one would expect based on their HDI. This is the case of Japan and Singapore in Asia, Estonia in Eastern Europe, Chile, Uruguay and Costa Rica in Latin America, Qatar and United Arab Emirates in the Middle East, and Cape Verde and Botswana in Sub-Saharan Africa. By comparing the magnitude of the residuals, we also see that the countries with the largest positive residuals, well above one point in the control of corruption five-point scale, include the world’s prime examples of good governance, such as Denmark, New Zealand and Sweden. In other words, there is a large portion of control of corruption outcomes in these countries that cannot be explained by development alone. 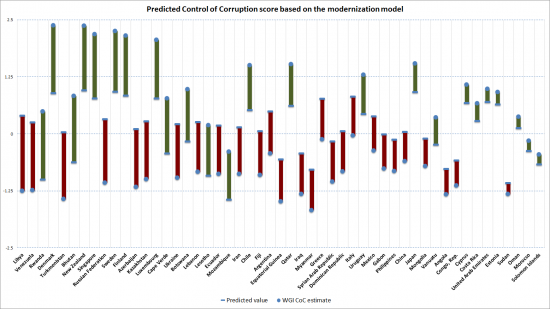 This analysis represents an important foundation for the next stages of ANTICORRP’s Work Package 3, entitled “Corruption and governance improvement in global and continental perspectives”. Further research in this work package will seek to identify drivers of governance change in selected cases, and the countries with the largest positive residuals are the ones more likely to have achieved higher control of corruption through human agency and not only through a process of modernisation and development. A more detailed study of these cases shall then contribute to the project’s ultimate objective of shedding light onto what explains successful control of corruption in a society.