By Ramin Dadašov and Niklas Kossow

When releasing the Corruption Perception Index (CPI), every year, Transparency International (TI) can be sure to attract the attention of the wider public including policy makers, academics and the media. According to its latest results, the problem remains severe across the globe. More than two thirds of countries covered by the CPI suffer from serious corruption. Still, the current report also says that there is significant improvement in many countries: this seems to be good news for the growing anti-corruption community. Yet, some of the CPI results do raise some eyebrows. The steady raise of Qatar’s scores, for instance, cannot be squared with the governance realities on the Arabian Peninsula.

The role of the CPI and its companion – the World Bank’s Control of Corruption indicator (CCI) – in raising public awareness of the magnitude and the spread of corruption worldwide cannot be underestimated. Moreover, thanks to these indicators and the resulting huge body of empirical research in the last years we have learnt a lot (although by far not everything) about the factors which explain cross-country variation in corruption levels. The key feature of both indicators is that they are based on the aggregation of perceptions of experts and the general population. The aggregation of a variety of sources aims to reduce the measurement errors associated with individual surveys and to reflect the broad concept of corruption which underlines the measurements. Although the CPI and CCI differ with respect to sources employed and aggregation methods, they are highly correlated (for a global sample of 173 countries in 2013 data, e.g., the correlation between both indicators is r=0.98). 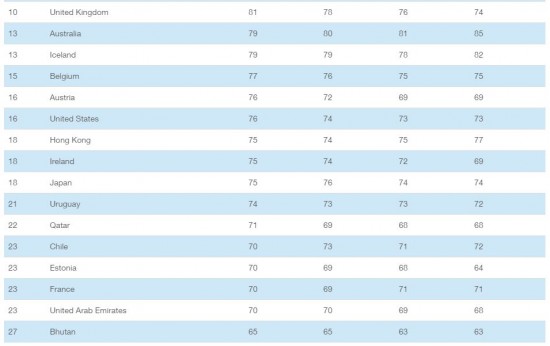 As aggregate perception indicators both indicators have received several criticisms since their first publication in the mid-90s. Leaving aside the discussion on methodological and conceptual issues, one of the major concerns is their “lagging nature”:  Changes in the assessments of corruption often reflect corrections of errors done in the past. One illustrative example is Brazil. Hit by the Petrobras scandal that broke in 2014, it has been suffering from a severe economic and political crisis; the country’s current CPI scores deteriorated compared to the previous year after being stable between 2012 and 2014. The positive development of uncovering a previously hidden corruption scandal was not reflected in the score.  Other notable example in this context is the worsening of CCI scores in Greece, Spain, Italy, and Portugal in the aftermath of the recent financial and fiscal crisis.

These examples make clear that interpreting changes in CPI or CCI should be done very cautiously. Using them for guiding policymakers can be misleading or even harmful as they might be silent about the potential outcome of anti-corruption reforms. Ukraine’s CPI score showed almost no change between 2012 and 2015, despite witnessing major anti-corruption reforms since the Maidan revolution in early 2014. Until very recently the methodology of CPI did not even allow for comparison across years which, despite explicit warnings by TI, did not hinder many users from doing so.

A corruption indicator that addresses the needs of the policy community thus needs to be a diagnostic tool that assesses the institutional capacity of a society to control corruption. It should be based on objective data, solidly grounded in evidence thereby transparently reflecting preventive policies for curbing corruption. Building on our work in ANTICORRP, the ERCAS team has been working on building such a tool.

Specifically, we propose an indirect way of capturing the national level of control of corruption through an Index of Public Integrity (IPI). Relying on objective and actionable data, it combines six different indicators reflecting aspects of red tape, transparency, judicial constraints, and social accountability.  A global version of the IPI covering around 100 countries will be available soon. A more limited version that covers only 28 European Member States was presented this month in a report commissioned by the Dutch EU presidency. Its approach enables researchers to track progress over time and to consider the impact of reform efforts. Similarly, as part of the DIGIWHIST project, our researchers are working on ways to use red flags in the context of public procurement as indicators for high-level corruption. As a governance field particularly prone to corruption, procurement practices can be used as proxies to estimate societal corruption levels, if used with care.

Our research shows that there is still a long way to go in order to reach truly objective measurements of corruption. Yet, there are steps in the right direction. Thanks to the efforts of the growing anti-corruption community we will soon be able to find indicators which will help us to inform the policy community on how to effectively fight corruption.