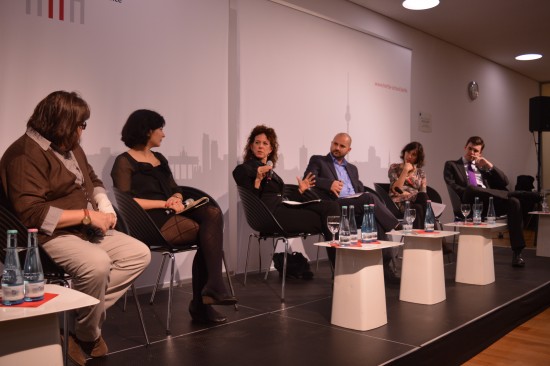 What does whistleblowing look like in the digital age? What are its benefits and pitfalls? On 17 November 2015 the Hertie School of Governance and the Council of Europe hosted a discussion on these questions. The event was a satellite event to the World Forum for Democracy, taking place at the Council of Europe 18 – 21 November and focusing on finding the right balance between freedom and control in democratic societies. The Hertie School brought together a set of panellists from a variation of countries and fields to present their very own experiences of working with whistleblowing. The panel was moderated by Anne Koch, regional director for Europe and Central Asia at Transparency International.

The different panellists showcased various experiences of working in the context of whistleblowing: Marius Dragomir, a journalist and senior manager for the independent journalism programme of the Open Society Foundations in London, Maksymilian Czuperski, working the Atlantic Council which recently supported the collection of evidence for the presence of Russian troops in Eastern Ukraine by crowdsourcing information from citizens. It also featured Simona Levi, the founder of Xnet, a Spanish online journalism platform specialized on engaging citizen. Xnet actively calls upon citizens to become whistleblowers and leak undisclosed information in order to uncover corrupt behaviour.

The final two panellists were Mara Mendes, project manager for Open Knowledge Germany and Alina Mungiu-Pippidi, professor of democratization at the Hertie School. They presented DIGIWHIST, a new EU Horizon 2020 project. The project aims at increasing transparency and efficiency of public spending. It will do this through the systematic collection, structuring, analysis, and broad dissemination of information on public procurement through online platforms. Alina Mungiu-Pippidi highlighted the centrality of procurement data in fighting corruption. Linked to information on aggregate asset and income declarations data, she hopes that this data will help detect potential conflicts of interest and identify systemic vulnerabilities. In this way DIGIWHIST is supposed to specifically support journalists in creating transparency within the procurement sector.

What is a whistleblower?

One reoccurring theme at the discussion was the actual definition of a whistleblower. Anne Koch opened the panel by describing it as “any person that wants to report wrong doing to someone who can do something against the problem.” This stood somehow in contrast to the experience of Xnet’s Simona Levi, who, for instance, collected emails from whistleblowers at big Spanish banks and reported on wrongdoings in these contexts. The panel agreed though that a whistleblower does not necessarily have to be someone working for the government or a private enterprise and release information from the inside. For Alina Mungiu-Pippidi it was “a person who is aware of a situation the rest of the world is not and brings it to public attention.” It can also be a group of people collectively gathering information that the wider public is unaware off, or analyse data collectively in order to highlight important information.

Who has the right to decide?

The debate also looked at the pitfalls of whistleblowing and discussed the questions of what safeguards are needed to prevent harm to innocent individuals through whistleblowing. In many countries protection of whistleblowers is still deficient and there are no laws specifically protecting whistleblowers from prosecution. Often those willing to share information are unaware of technical tools which can be used to protect their identity. The participants highlighted tools such as GlobaLeaks, which provides anonymous channels for whistleblowers. Journalists in particular carry a twofold responsibility. On the one hand they need to protect their sources and those who entrust them with information, also by teaching them secure ways to share information. Journalists, however, are also responsible for the information they publish. When Anne Koch asked the panel who has the right to decide what publications are in the public interest, the panel generally agreed: journalists can decide, but they have to be aware of their special responsibility. They will, however, always be better placed to decide than civil servants who might incriminate themselves by publishing data.

In the end, the best kind of whistleblowing might be done collectively. Communities of people can uncover corrupt behaviour of local officials and document what is happening around them. Also, individual whistleblowers depend on those around them. As Alina Mungiu-Pippidi pointed out: “In the end, laws cannot protect whistleblowers, but public opinion can.” A similar conclusion was also taken at a panel on safe whistleblowing at the World Forum for Democracy in Strasbourg, which representatives of ERCAS also attended. One conclusion to be taken from both discussions is that whistleblowing should not remain an exception, but it should become the norm for citizens to report wrongdoings that they witness.