For many years corruption was seen as a problem of the developing countries only. The European Union, on the contrary, was considered the temple of rule of law, exporting good governance to its peripheries and worldwide. While many European countries remain among the best governed countries in the world, the downfall of the Santer Commission on charges of corruption, the enlargement to new member countries with unfinished transitions and the economic crisis strongly indicate that control of corruption is difficult to build and hard to sustain. A discussion paper prepared as part of the ANTICORRP research project and released by the Hertie School of Governance, in collaboration with Bertelsmann Stiftung, addresses these issues in its analysis of control of corruption in European Union member countries.

The report, entitled ‘The Good, the Bad and the Ugly: Controlling Corruption in the European Union‘, shows the consequences of corruption on fiscal deficit, vulnerable employment, gender equality, government spending, tax collection, electoral turnout and braindrain in EU member states, arguing that corruption is not a marginal phenomenon, but a central factor affecting both the economic crisis and the recovery potential of European economies. It also presents corruption across European member countries highlighting the best and worst European performers at national and regional level and classifying countries in four different groups by corruption risk. Lead researcher Alina Mungiu-Pippidi offers a causal model explaining control of corruption and its main determinants and builds recommendations for improving control of corruption on the basis of the explanatory model.

The study was officially launched at the event “Understanding Corruption in the EU: the Policy Dimension”, at the European Parliament on 9 April 2013. The meeting was hosted by members of European Parliament Dr. Franziska Brantner, Jens Geier, Eva Joly and Monica Macovei. After the presentation by Prof. Alina Mungiu-Pippidi, the research findings and recommendations were debated in two discussion rounds with experts from the Bertelsmann Stiftung and researchers from ANTICORRP consortium members. 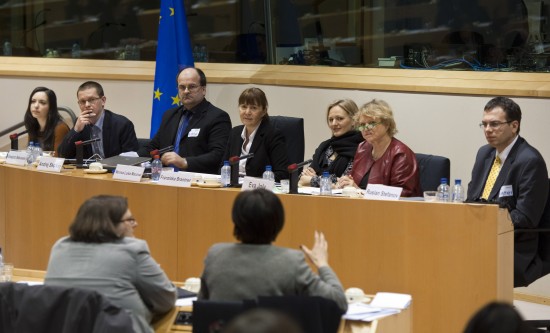 After public feedback the report will be reviewed and published as the first policy paper from ANTICORRP. The report has already received extensive media coverage, including features in Die Welt, the Spiegel Online, and the Euractiv news portal.