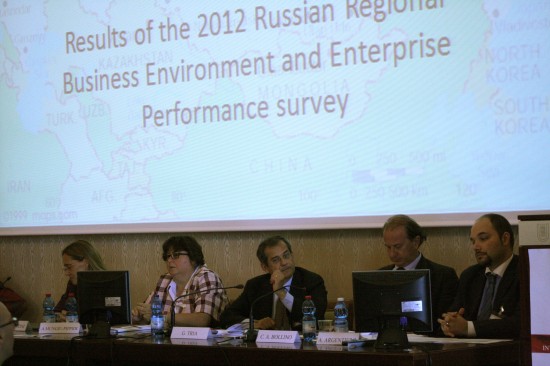 ERCAS director Prof. Alina Mungiu-Pippidi presented ERCAS’s most recent research work on corruption in the European Union (EU) at the XXV Villa Mondragone International Economic Seminar, organised by the University of Rome Tor Vergata, which took place on 25-27 June 2013. The seminar, entitled “The Long Term Policy View: Shifting Wealth, Income Inequalities and Demography”, brought together scholars working on a wide range of topics and included the panel “Economics of Corruption”, where Alina Mungiu-Pippidi discussed the relationship between government expenditure and corruption in a talk entitled “Big Government, Small Government and Corruption: a False Dilemma”. The panel also had contributions from Francesca Recanatini, from the World Bank, who discussed measurements of governance and corruption, Gregory Kisunko, also from the World Bank, who presented data on regional trends of corruption based on the Business Environment and Enterprise Performance Survey (BEEPS), with an emphasis on the corruption context in Russia, and Amedeo Argentiero and Carlo Andrea Bollino, from the University of Perugia, who talked about informal economy and its relationship to corruption.

In her presentation, Alina Mungiu-Pippidi contextualized corruption in EU member states by showing best and worst performers according to several available indicators from public opinion and expert-based surveys, such as the Eurobarometer and the World Economic Forum. According to these data, countries such as Romania, Greece, and Slovakia appear among those where corruption is perceived to be most prevalent. Additionally, preliminary results from a survey conducted at the subnational level by the Quality of Government (QoG) Institute as part of the ANTICORRP project were presented, also showing Romania as a country with high frequency of bribery in all country regions, and Bulgaria and Italy similarly as countries with considerable frequency of bribery, but concentrated in certain regions.

With regards to the debate on the relationship between government expenditure and corruption, it is interesting to notice that the least corrupt countries in the EU, according to the same indicators, include classic welfare states with big public sectors, such as Denmark, Sweden and Finland. Given this background, the analysis conducted by ERCAS looked at this issue from the perspective of whether different patterns of corruption can be observed in relation to different kinds of government spending. The results, already in part presented in the discussion paper “The Good, the Bad and the Ugly: Controlling Corruption in the European Union”, reveal that there are significant differences in the association between social spending and public investment expenditure: while higher government expenditure on health (as a percentage of GDP) is associated with stronger control of corruption, higher government investment in capital formation (also as a percentage of GDP) is observed in countries with weaker control of corruption.

The main explanation for this difference suggested in the study is that government expenditure on investment is more discretionary in nature, and therefore more susceptible to favouritism in its allocation, that is, certain parties, companies or individuals with privileged access to the government may receive preferential treatment in the award of contracts or distribution of funds. Evidence of favouritism has been collected in Romania and in Hungary. In the former case, Alina Mungiu-Pippidi has identified an association between election results for specific parties in power and the share of discretionary funds allocated to the government party at the local level. In Hungary, researchers from the Corvinus University Budapest, ERCAS’s partner in ANTICORRP, have identified changing trends in the market shares of large companies according to the change in government that took place in 2010. Interviews with company managers revealed the perception that this is explained by the preferences of the new government for particular well-connected firms.

The data analysis presented by ERCAS’s director at the conference also showed an association between lower control of corruption and higher public deficits. According to the theoretical model that orients ERCAS’s research work, corruption results from an equilibrium between resources and constraints, and successful anti-corruption approaches should tackle both parts of this formula, that is, should aim at decreasing resources and strengthening constraints. As public spending represents a kind of resource available for spoliation by predatory elites, it should also be targeted by efforts to reduce corruption, preferably in the direction of decreasing the share of funds that can be discretionarily allocated and by improving transparency about the allocation procedures of these funds. At the same time, it is important that these measures are accompanied by efforts to improve constraints by strengthening media freedom, civil society, social accountability and judicial capacity. For countries such as Romania, Italy, Slovakia, Greece, and Bulgaria, which are among the ones with high corruption risk in the EU, such measures are essential for a sustainable effort to improve governance in the long term.