Finding an accurate measure of corruption is a problem that has puzzled anti-corruption researchers for some years now. In the framework of the ANTICORRP project, researchers are currently trying to produce a new generation of indicators which allow comparisons across countries and time while being more concrete and specific than the first generation which are based on perception aggregates (for instance the Corruption Perception Index).

This new European paper takes an important step in that direction by using a technique known in audit studies as data mining. Under this method, researchers look for deviations from an ordinary, normal pattern to identify corrupt behaviour. In this paper, Fazekas et al.[i] use a newly created database of public procurement procedures in Central and Eastern European countries to reach three objectives:

Fazekas et al produced a series of studies [ii]  developing new corruption measures, of which “Are EU funds a corruption risk? The impact of EU funds on grand corruption in Central and Eastern Europe” is only the first to have major findings. These are as follows:

Estimated value  of national and EU funded public procurement disbursed in a particularistic way, by country, % of 2009-2012 total GDP 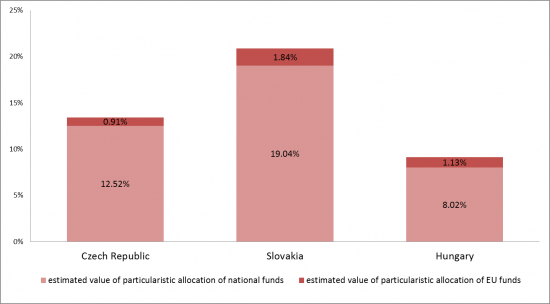 Given the high risks, what can the EU do to better protect its investment and ensure that funds are disbursed in a more competitive and transparent manner?  The ANTICORRP policy team offers the following recommendations: