Speaking on Thursday, 3 December on the corruption indictments of additional FIFA officials (bringing the total number of individuals charged to date to 41) American Attorney General Loretta E. Lynch said: “The Department of Justice is committed to ending the rampant corruption we have alleged amidst the leadership of international soccer – not only because of the scale of the schemes, or the brazenness and breadth of the operation required to sustain such corruption, but also because of the affront to international principles that this behaviour represents”. In other words- it has almost become impossible to defy common definitions of public integrity as openly and as outrageously as FIFA has done for many years. On international Anticorruption Day (9 December) it is worth pondering on what this means.

Based on what we know, FIFA officials systematically distributed broadcast rights or picked tournament locations on the basis of favouritism (in exchange of kickbacks or other favours). This means that in the way FIFA operated, corruption was the rule and not the exception. American officials claim that for decades, FIFA officials “used their power as the leaders of soccer federations throughout the world to create a web of corruption and greed that compromises the integrity of the beautiful game”[1]. Everybody knew. Opponents were systematically silenced, eliminated or remained a tiny minority.

Should this come as a surprise? Looking at rankings of public integrity, the average of the 209 countries whose soccer associations are the FIFA constituents is just 5, on a scale where New Zealand stands at 10 and Equatorial Guinea at 1. Somalia, standing at 1.3, nominated Sepp Blatter for the FIFA presidency in 2011. The number of countries where integrity clearly prevails (say, above the grade of seven) is only 44, with 94 countries scoring above 5. If FIFA were a country, it would clearly not be in upper half. Rather we would most likely see it somewhere near Brazil and stand around rank 121, with a score of 4.2. 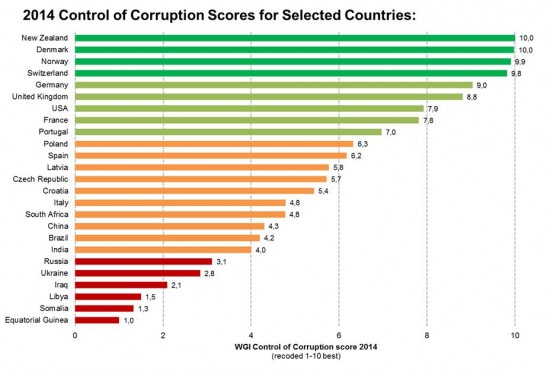 These are scores on the control of corruption taken from the Worldwide Governance Indicators. This is only a perception ranking, even if arguably the most objective one to date as it aggregates different ratings for a country. After all, however, Brazil has been known for some years to struggle with corruption, which seems not to have been the case with FIFA. What if we built a corruption indicator looking only at procurement practices? This was already done for the EU-28. It shows that in this context EU institutions might rank just behind Portugal at place 16. It might be better not to ask where the UN would stand if ranked as a country – an organization where, after a major clean-up, there are still high-level officials which could be arrested on corruption charges.

It seems that to arrive at a situation where corruption is deviation from the norm, rather than the norm itself there is still some way to go. What anticorruption fighters around the world battle with is a vicious social order in which you have to know who somebody is in order to predict what share of public resources he or she will get. This is what I argue in my latest book, The Quest for Good Governance. We must wage a war to establish the norm of public integrity before punishing the defectors from it. It is a matter of understanding what the majority practice is.

The resemblance between FIFA and one of the countries below average in global corruption ratings does not stop here. Corruption is all about unchecked power and lack of public oversight which allows officials to convert their influence into material assets. Where this exists, power monopolies take hold even if the institution of formal competitive elections exists. For many years Mr. Blatter enjoyed the combination unlimited terms and being the only candidate on the ballot, a familiar practice in sub-Saharan Africa or Central Asia, which are seen as the most corrupt regions in the world. In a situation in which discretionary power is preventing any opposition (no football federation in the world had the courage to endorse the mock candidature of an American sports journalist to the FIFA presidency due to fear of reprisals from FIFA leadership), internal control agencies or committees are also subdued. They were regularly petitioned to intervene, but ended their investigations due to “lack of evidence”.

In my book, I argue that this is the reason that countries which have adopted anti-corruption agencies or adopted more anti-corruption legislation did not progress more than countries which did not. Actually, it seems to be the reverse: presently the most corrupt countries have the most laws and agencies. Occasionally, these are used against opponents of those corrupt leaders who control these agencies. The best anti-corruption policy would be, however, to replace the leaders of those countries all together. Cliques and elites that were in power all these years when corruption flourished would be removed. Officials would finally be able to introduce term limits, liberalize access to being elected and conduct all other common sense reforms that many soccer fans around the globe expect from FIFA since many years. 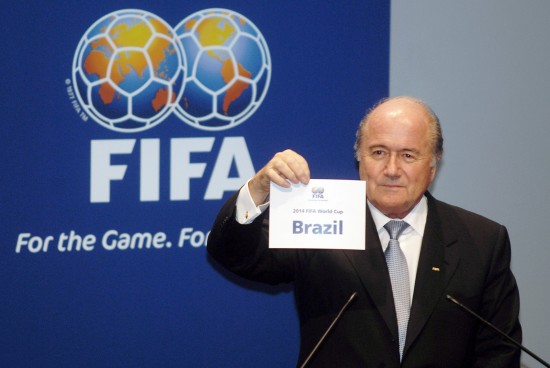 This is difficult, however, because the whole political economy of a corrupt country is built in a corrupt way and is not easy to disentangle. For instance, in Brazil, a country in which the fight between integrity and corruption is at least ongoing, the poorest regions of the country are used by corrupt politicians to get re-elected in exchange for the allocation of fund. In a very similar way, for FIFA it was stadiums or other favours for poorer countries, which turned national associations into clients of the ruling clique (if they were not directly bought by cash handouts on Election Day). Richer and more politically active regions demand integrity from FIFA, even in the run-up to or during a World Cup. In the end of the day the result is unspectacular. Corruption does not depend on nationality – Mr Blatter is, after all, a Swiss national, whose country has a staggering control of corruption score of 9.8 and is ranks at number 4 globally.  Corruption depends on your constituents. If the majority of them can be bought, intimidated or pushed around, then a country, no more than an international organization, won’t be able to establish control of corruption.

In the end of day, FIFA is, however slightly better off than a country. As it seems, some jurisdictions external to its own home-grown impunity system seem to apply. At least the Swiss and American legal systems are shining a light on FIFA corruption, as the defendants luckily used American banks for their transactions. In doing so they are likely to have violated American laws. They thus created the conditions for what is for once a very welcome American intervention.