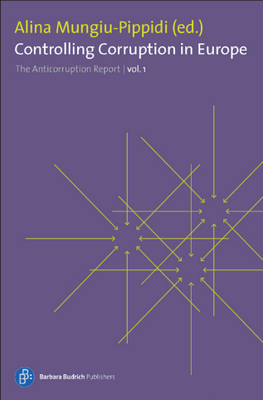 Kicking off a series of annual policy-oriented publications originating from the European Seventh Framework Programme (FP7) research project ANTICORRP, the volume Controlling Corruption in Europe has been now released in partnership with Barbara Budrich Publishers. This first policy report covers the European continent divided in three areas, namely the European Union (EU), South-Eastern Europe and the former Soviet Union. Based on a compilation of analyses by researchers from several ANTICORRP consortium members, the report presents comparative data on all three regions, complemented by three case studies on EU member states: Romania as a “problem” case with regards to corruption and the application of EU funds, Hungary as an average country where the collected evidence shows more challenges than previously believed, and Estonia as a success story and a clear ‘achiever’ of good governance.

This publication also presents an important conceptual contribution of the ANTICORRP project to the academic debate on corruption, namely by focusing on the concept of control of corruption – in contrast to just corruption itself –, which is defined as “the capacity of a society to constrain corrupt behaviour in order to enforce the norm of individual integrity in public service and politics and to uphold a state which is free from the capture of particular interests and thus able to promote social welfare.” Moreover, it highlights ‘legal’ and ‘illegal’ aspects of corruption, showing that favouritism and preferential treatment in the allocation of public funds and in public services and law enforcement is also considered as corrupt by public opinion in European countries. This is revealed by evidence documented in a pan-European survey conducted by the Quality of Government Institute, at University of Gothenburg, which represents one of the biggest data collection efforts in the ANTICORRP project and is the largest governance survey in Europe to-date.

With regards to its methodology, the report seeks to evaluate corruption risk and quality of government at the national and regional levels through an assessment of corruption indicators that are sensitive to change and policy intervention, thus making a contribution to the documentation of innovative disaggregated measures of corruption as an alternative to established perception-based indicators. Additionally, solid empirical evidence of policy consequences of corruption is presented, showing how it bolsters deficits on behalf of discretionary spending and in detriment of universal spending in sectors such as public health and education, reduces tax collection, hurts market competition and further generates vulnerable employment and brain drain.

Drawing on the corruption risk assessment analysis introduced, where each country is examined on the basis of an equilibrium model of corruption including policy determinants, grouped as resources and constraints, ten policy recommendations are put forward proposing concrete paths of action towards reducing corruption risks in the most vulnerable countries. The recommendations emphasise in particular the importance of reducing administrative and fiscal opportunities for corruption, strengthening public audit and monitoring capacity more broadly, including civil society and media, and taking into account the cost-effectiveness of anti-corruption policies and the limitations of approaches based exclusively on repression.

The first volume of the Anticorruption Report series will be officially launched on 6 September 2013, at the European Consortium for Political Research (ECPR) General Conference in Bordeaux, France.

(The picture featured above is from rt.com and is credited to AFP/Patrick Hertzog.)