Freedom House released last week its third report on Freedom on the Net, which assesses key trends in freedom of the internet, evaluating barriers to access, limits on content, and violations of user rights in 47 countries, from January 2011 to May 2012. The study was produced by over 50 researchers who have investigated laws and practices governing the access to internet, interviewed relevant actors and tested website accessibility. The findings reveal increasing restrictions on freedom in many countries, and a growing refinement and indistinctness in the methods used by governments to exert control over the internet.

Among the countries examined, the highest degree of freedom of digital media was found in Estonia, followed by the United States. “Estonia has a highly developed online culture that includes online voting and access to electronic medical records and some of the lightest content restrictions in the world”, quoted an article published by TrustLaw.  The lowest degree of internet freedom was encountered in China, Iran and Cuba. Furthermore, China is sometimes used as an example by governments such as the one in Belarus, Iran and Uzbekistan, wishing to restrict the internet freedom.

Overall, the study shows that since January 2011, 20 of the 47 countries surveyed experienced a decline in the degree of in internet freedom. This tendency was most evident in Ethiopia, Bahrain, and Pakistan. Especially in the Middle East, the declines can be associated with intensified censorship, arrests, and violence against bloggers in reaction to public calls for reform. In Saudi Arabia, Ethiopia, Uzbekistan, and China, authorities imposed new restrictions after observing the key role that social media played in the uprisings in Egypt and Tunisia.

According to the report, the adoption of restrictive legislation was a common method of control, implemented in a large part of the countries assessed by the study. “In 19 of the 47 countries examined, new laws or directives have been passed since January 2011 that either restricts online speech, violate user privacy, or punish individuals who post content deemed objectionable or undesirable”, concludes Freedom House. Other methods observed by the study were arrests or physical attacks against bloggers as well as ordinary users for political speech online, and enhanced surveillance of user activity.

Next to this clear and worrisome trend of deterioration, the report also showed 14 countries that registered a positive trajectory, with Tunisia and Burma experiencing the largest improvements after considerable political openings. The other positive developments occurred almost exclusively in democracies, highlighting the importance of broader institutions of democratic governance in upholding internet freedom. The report highlights cases in which the activism of civil society, independent courts or technology companies have contributed to the increase in the freedom of the internet, showing that a positive change can be achieved in this manner.

The picture featured above is from www.lankastandard.com. The map portrayed below is part of the Freedom on the Net 2012 report. 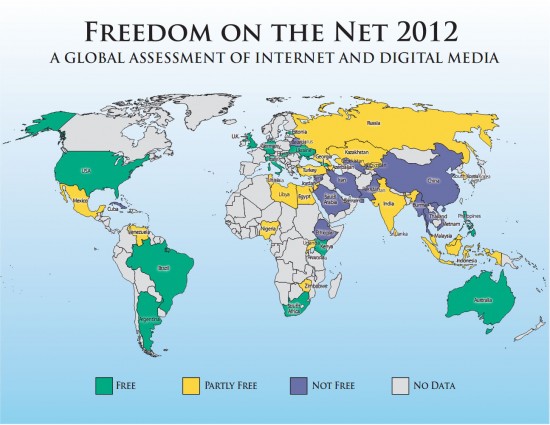