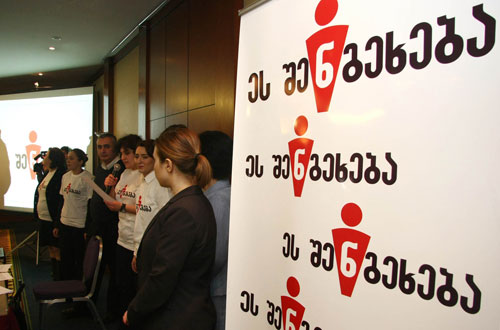 In the run-up to the next parliamentary elections in Georgia, to take place in early October, a civil society campaign has sparked the debate on the need for changes in the country’s electoral legislation. The campaign entitled “This Affects You Too” has brought to the public attention potential restrictions to political liberties and participation created by recent amendments to the electoral and criminal codes of Georgia, and has put forward its own agenda to improve electoral regulation in the country.

The campaign was strongly motivated by changes passed by Parliament last December, which effectively restricted the possibility of companies and foreign individuals to finance candidates running for Parliament. Moreover, a new law regulating political and civil non-profit organisations have established similar restrictions to any individual or association that openly endorses a candidate or party. Critics have claimed that these changes are obscure and have the objective of limiting financing to the opposition, more specifically to the coalition led by wealthy businessman Bidzina Ivanishvili, after he declared his intention of running in the elections. Activists also claimed that the legal changes impose considerable restrictions to freedom of speech, and create room for wide interpretation that can be used to limit political competition.

Following the introduction of the proposed amendments, a coalition of NGOs and media outlets, supported by the Open Society Georgia Foundation, launched on February 13th, 2012 the first phase of the campaign called “This Affects You Too”, where a petition calling for the revision of the controversial amendments was disseminated among Georgian civil society. Around 170 NGOs and media entities, as well as 1500 individuals, signed the petition, which was presented to Parliament on February 17th along with a package of legislative proposals elaborated by the coalition.

Among the proposals were measures to prevent fraud in and increase transparency during vote-counting procedures, to restrict the use of public resources for campaign activities of the governing party, including the participation of public officials at campaign events, and to ensure equal media coverage for political parties during the election period. As part of the campaign, its organising members have also held information meetings in several Georgian cities updating the population on the restrictions imposed by the amendments passed.

The campaign has already been partly successful in creating pressure for changes in the legislation, as some of its proposed amendments were adopted by Parliament in April. In early May the coalition started the second stage of the campaign, focusing more on advocating for changes to improve the media environment ahead of the parliamentary elections, with an emphasis on allowing candidates equal access to media and increasing coverage of the elections, in order to make more information available to citizens. The campaign has also made an appeal to the government to invite international observer missions to monitor the electoral process in October. However, increasing tensions among the running party and the opposition raise uncertainties about whether the campaign will succeed in bringing about all necessary changes to guarantee the fairness of the coming elections.

The picture above was featured on civil.ge and is credited to InterPressNews.