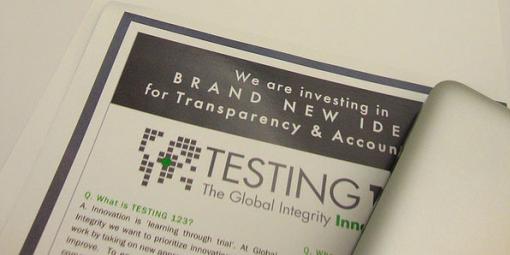 While a large part of international aid to promote anti-corruption and integrity still takes a traditional approach focusing on the implementation of anti-corruption agencies, legislation and public sector reform, other actors have begun to foster more novel approaches. One example is the new Innovation Fund established by Global Integrity. In order to promote accountable and transparent governance around the world through innovative research and technologies, this organisation has launched the Global Integrity’s Innovation Fund’s programme Testing123, in which five ideas for new projects have been selected for an initial funding of 10,000 USD to finance their implementation within the next six months.

The fund was officially launched in September 2012, and sought to finance the implementation and testing of brand-new ideas on how to improve transparency and accountability in different countries. Until the end of November 2012, over 300 ideas were submitted from 71 countries, out of which about 30% focused on Latin America & the Caribbean, 20% targeted Africa, 17% Asia, 13% Europe, and 8% for the United States & Canada and the Middle East & North Africa. The remaining 10% had an international application. Among those countries, Argentina, Nigeria and Kenya show up as the ones with the highest number of applications. In terms of the areas in which applicants wish to increase transparency and accountability, many ideas focused on poor public service delivery, legislative failures, and public procurement issues. The types of ideas brought to the table included: the tracking of public expenditure and budgets, media-related reforms, as well as initiatives in the fields of youth and education.

After pre-selecting 10 ideas for a second round of evaluations, the programme finally announced the five “winners” in April 2013. One of the projects to receive the grant is called “Simply Visualizing Politics”, from Macedonia, which seeks to record and visualise changes in the views of Macedonian politicians over time, based on the automated analysis of debates in the Macedonian Parliament. The main goal of the project is to inform citizens about the interests of their political leaders and the issues they support.

Another selected project is “Hidden Agenda”, from Spain, which consists of a photo-based storytelling platform that seeks to make public the schedules of top government officials’ in Spain, thus exposing their contacts with lobbying efforts and other interest groups. In Serbia, Planizacija.rs will attempt to collect regulatory documents for urban development and shape them into publically understandable and accessible tools for citizen engagement in urban planning.

“Police-Citizens Protocol”, proposed by organisations in Mexico and Argentina, seeks to offer citizens easily accessible information on their rights when being approached by police officers, so that they can invoke these rights against unlawful action by the police. Finally, Veritza.org was created by a Serbian investigative journalist based in the United States, and offers a real-time corruption alert system that leverages automated “mashups” of disparate datasets to potentially reveal corruption-prone patterns.

Through Testing123, Global Integrity seeks not only to support the implementation of specific and isolated ideas scattered across the globe, but actually to test their feasibility as tools and approaches that may be adapted and replicated in other contexts as well. The six-month implementation time frame for these projects is thus crucial to indicate their potential in terms of effectively contributing to empower and engage citizens against government abuses and in favor of political reform.

(The picture featured above is from globalintegrity.org.)