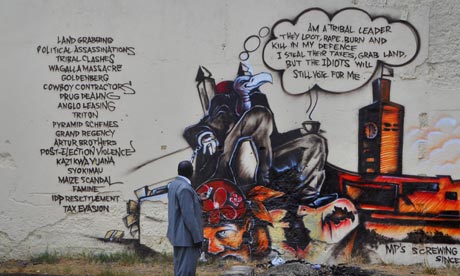 A group of graffiti artists have been using their artistic skills to urge Kenyan citizens not to vote to politicians seen as corrupt in the next elections, likely to be held in the end of this year. Their murals portray members of Parliament as vultures in suits and associate these figures with embezzlement and ineffectiveness.

According to Boniface Mwangi, a photographer among the artists engaged in this ‘campaign’, their strategy is to paint these representations during the night on busy parts of Nairobi, where a large number of citizens can see them while going to work the next day. They have also disseminated sentences like ‘vote the vultures out of parliament’ in several parts of the city.

Their goal is mainly to raise awareness and engage the population in contributing to change the political status quo. Mr. Mwangi highlights that they are motivated by their criticism of the Kenyan political elite, which they claim to be corrupt and exploit ethnic cleavages for political gains, leading to disastrous consequences such as the massive ethnic killings after the elections in 2007.

For more details read the article “Kenyan graffiti artists step up battle against ‘vulture’ politicians” on guardian.co.uk. The picture shown above is also featured in the article and is credited to Clar Ni Chonghaile.