Young entrepreneurs use technology to expose bribery in the country, and thereby hope to raise awareness and help to change Russians’ attitudes towards corruption 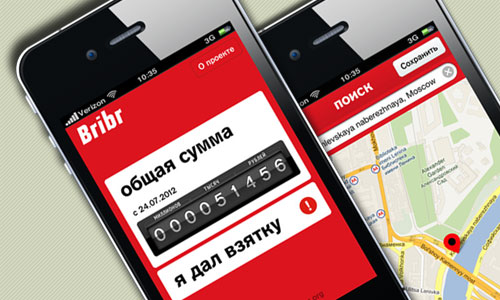 Popular frustration with the high levels of corruption in Russia has been increasing, as evidenced by demonstrations and protests in the past year. According to the latest Transparency International’s Corruption Perceptions Index, the country ranks 143 among 183 countries. Motivated by this situation, a team of young Russian entrepreneurs developed an application for iPhones and iPads that enables individuals to report bribes all over the country.

According to an article published on The Moscow News, the new tool, called “Bribr”, was released in September and allows users to send reports anonymously. Each report includes the place where the bribe occurred, the amount paid, the institution to which it was paid and also for which purpose – changing exam grades, guaranteeing admission to schools and kindergartens, obtaining a permit etc. All the information submitted through the application is then collected on the initiative’s website (in Russian), where it is compiled on a crowd mapping platform that aggregates all reports into general statistics, showing the total amount paid in bribes and the places and purposes that are most common. So far, over 5 million rubles (€ 124,000) in bribes have been reported.

This initiative is the first of its kind in the development of an application for smartphones, but the principle behind it has been applied in other crowdsourcing projects worldwide, such as the “I Paid a Bribe” initiative, originally implemented in India and later replicated in countries such as Kenya and Zimbabwe.

According to Yevgenia Kuida, the initiative’s founder and a London Business School graduate, Bribr aims at contributing to change people’s attitudes towards bribery in Russia. “If you see everywhere that bribery is bad, maybe somewhere in the back of your mind, your attitude toward bribery is going to change, at least a little bit,” she said to The Moscow Times. In another interview to The Moscow News, she emphasised that “the attitude that bribery is bad, but it’s really OK just because everybody does it, is unacceptable”. The team behind Bribr now wants to expand coverage by developing the application also for Android phones, and creating a mechanism to allow reporting directly on the website. Moreover, the project includes plans for the offline sphere, such as a campaign with stickers reading “We don’t accept bribes”, and symbolic zero ruble bank notes that citizens would give out when asked for a bribe.

The application has had great repercussion since its release, with over 20,000 downloads just in the first two weeks. Political activists such as Alexei Navalny and TV host Ksenia Sobchak showed their support to the initiative. However, other anti-corruption activists have voiced concern on the project’s limitations. Elena Panfilova, director of Transparency International’s Russian chapter, said to The Moscow News that “this app caters only to a small percentage of Russians – middle-class, mostly young people who have smart phones”, and that “unless [the team] can somehow distribute smart phones to people in the Ural Mountains and Siberia, Bribr will have no real widespread effect on corruption or bribery”. She also emphasised that collecting this information is not enough, as most individuals who report bribes want to see concrete results and, unless this is followed by investigation and punishment of bribe takers, people might lose their motivation to report in the first place.

The picture featured above is from periodismociudadano.com.