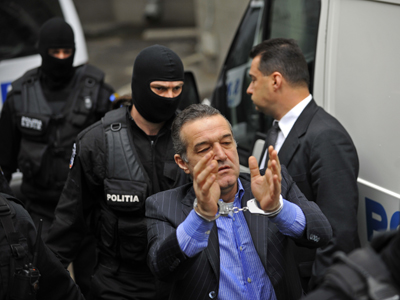 On June 4th, the controversial politician, business tycoon and sponsor of the Steaua Bucharest football team George “Gigi” Becali was found guilty and sentenced to serve three years in jail by the High Court for Cassation and Justice in the ‘suitcase’ bribery case. This is the third guilty verdict against Becali in a series of cases involving unlawful seizure of persons, complicity to abusing one’s official capacity, forging documents, and bribery. This comes at the end of a decade-long effort to hold him accountable for his wrongdoings in Romania.

Becali became well-known in the public sphere after his take-over of the Steaua football club in early 2003. The privatisation of the Steaua football club, which formerly represented the Ministry of Defence Sports Club “Steaua” (CSA Steaua), is a typical case of post-communist privatisation. In the late 1990s, it was separated from other ministry divisions and placed under the administration of a newly established legal person founded and led by businessman Viorel Paunescu, who blatantly mismanaged the club and incurred a series of debts. This radically diminished its market value (despite obtaining a 20 years lease on the premises of the Ghencea Stadium from the Ministry of Defence). At the same time, Paunescu brought Becali in the administration and the latter funded the club from his own personal assets. Only in late 2002 and early 2003 was the football section of the Ministry turned into a commercial enterprise and was to be sold, but due to the low market value and the debts it had incurred to Becali and Paunescu, the newly minted shares in the club were simply to be given to the creditors. However, in a radical – and still unexplained – turn of events, Becali pushed Paunescu into a minority position and assumed 51% of the shares of Steaua in early 2003.

After the take-over, Becali also assumed Steaua’s liabilities to the state, which he did not pay. For this reason, Becali was targeted in 2006 by the Revenue Service in order to recover Steaua’s historical debts by impounding part of his fortune. This episode, known as the “Becali-Bodu war” (Sebastian Bodu was the head of the Revenue Service at the time), culminated in a victory for Becali, as the Revenue Service lost the eventual trial against him due to procedural failures. In parallel to the dispute Becali transferred all of his shares in Steaua to his nephews and since 2006 no longer holds any of the club’s shares. This case is paradigmatic for post-communist privatisation processes, where remaining debts of the privatised entities to the state commonly resulted in lost resources for the public administration, as the weakness of the justice system leaves the state unable to enforce a recovery of owned assets and to punish abuses and mismanagement.

Becali’s recent convictions, however, were not related to the dodgy deals while taking over Steaua. In February 2013, Becali was sentenced to three years in jail by the High Court of Cassation and Justice, under the accusation of, together with his bodyguards, unlawfully seizing several persons who had stolen his car. In another case, Becali was also sentenced by the same Court on May 20, 2013 to two years of detention, under charges of complicity to abusing one’s official capacity, in a case of land exchange with the Ministry of Defence where he largely profited from exchanging land plots he owned for others of much higher value, which were owned by the state and managed by the Defence Ministry. The exchanges took place between 1996 and 1999 and this helped Becali start his fortune. The representatives of the Ministry, former Minister of Defence Victor Babiuc and former Chief of General Staff Dumitru Cioflina, were also sentenced to two years imprisonment for abusing their official capacity in continued and aggravated form. The three were also ordered to pay 421.280 USD plus interest for the damaged caused to the state. Overall, Becali caused the Romanian state a damage of USD 890,000 in this land deal.

The latest conviction on June 4th was in a case remanded for trial by the prosecutors of the National Anti-Corruption Directorate (DNA) in December 2008. Becalli was investigated together with several other accused, such as the coach of the national football team, Victor Piturca, Becali’s deputy Teia Sponte and one of Becali’s lawyers, Alina Ciul. The DNA accused Becali for two cases of bribery, and the charges against the other defendants included aiding a felon and forging private documents. According to the accusations, in 2006 and 2008 Becali bribed players of other teams to win matches whose results then favoured Steaua’s position in the championship and helped leading it to win the title. The case included charges of forgery, related to documents used in an attempt to hide the real destination of the cash offered to “Universitatea Cluj”, one of the teams bribed. Becali admitted to forging the date of a contract through which he was purchasing land in Cluj and to convincing Victor Piturca to sign as a witness. He apologized and claimed that the bribes were a bonus for the players to “do their job right” and to actually prevent match fixing by influence of other parties.

He was originally acquitted by the three-judge panel of the High Court of Cassation and Justice in April 2012, based on the understanding by two of the judges that he had no personal gain from incentivising a team which was not directly playing against his own. Alternatively, the dissenting opinion argued that a direct material benefit would come to Steaua and Becali himself from the team winning the league title. The conviction then came after the prosecution succeeded in getting the acquittal overturned by the five judge panel of the same Court. This case illustrates an important discussion related to the very definition of corruption. The debate around the lack of public actors’ involvement and the defence’s argument that Becali did not personally profit from the bribery of teams not playing against Steaua refute an important principle that private games free of manipulation by individual actors through financial means are also in the public interest.

Becali is currently in jail serving the sentences established in the previous two convictions, and the recent sentence has to be merged by the competent court (the Bucharest District 5 Court) with the other jail terms received and might result in an extension of the time served. Meanwhile, the business tycoon has waged an aggressive media campaign to convince the general public that he should be released, arguing that his arrest was politically driven. The case has received broad media coverage, with many TV stations asking for his release. According to media reports, some even initiated “Free Gigi” petitions. These media campaigns have managed to influence people’s perception in his favour. According to a recent survey carried out in the capital city, more than half of the people consider he should be released from jail, and only 25% were against his release. Among the most popular reasons for freeing him were: too much time has passed since he committed the crimes (55%); he did charitable acts (13%); he is innocent (12%) and because he is funny (1%), reports RealitateaTV.

(The picture featured above is from www.ziarulatac.ro.)