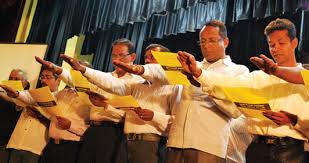 Broad civil society coalitions against corruption have become more common in the past years, and several examples have been documented in a wide range of countries and regions. From the Coalitions for a Clean Parliament in Eastern Europe to business sector articulations in some Asian countries, their profiles and focus vary from country to country, but all represent a very positive development regarding the increasing relevance of civil society in the fight against corruption. In late 2012, another such example was registered with the emergence of a Sri Lankan Coalition against Corruption, formed by several segments of Sri Lankan society, including activists, academics, journalists, members of trade unions and artists.

Officially launched in October 2012, the coalition was motivated by the widespread perception that corruption is a severe problem in Sri Lanka. Surveys conducted in 2011 revealed that one in two Sri Lankans consider that corruption is increasing in their country. Based on Transparency International’s Corruption Perceptions Index (CPI) released in 2012, the country ranked 79 among 176 countries. According to the spokesman for the Coalition’s Action Committee, “corruption in Sri Lanka is widespread and rampant. Corruption has affected both public and private sectors. We need a single organization raising a single voice to fight against corruption”. Some of the organisations involved in the initiative, such as trade unions, were already known for being active in relation to governance issues and revealing corrupt activities, but their isolated efforts were often followed by threats and intimidation. Therefore, the idea of creating a broader coalition was also seen as an important step to strengthen these organisations against outside pressure and violence.

This is the first coalition of its kind in Sri Lanka, and it has established as its main goals strengthening the parliamentary oversight committees on financial matters, discouraging the misuse of public property, promoting increased transparency in state finances and the passing of legislation on right to information and whistleblower protection. The coalition also plans to organise public hearings on corruption, in a so-called ‘People’s Tribunal’.

In addition to its advocacy work, the coalition investigates and reveals instances of corruption and requests relevant authorities to take necessary action. It has recently contributed to exposing questionable land allocations by the government to private development projects. According to coalition members, many allocation procedures have been characterised by violation of existing regulation and sale of public property below market prices to large private enterprises.

In the complex post-conflict context in Sri Lanka, fighting corruption is certainly a difficult and dangerous task, but this effort by Sri Lankan civil society to strengthen itself collectively is a good example of how collaboration can give civil society more leverage in its anti-corruption engagement. Although it is still early to assess the success of this enterprise, it is a positive example of cooperation across several segments of civil society that can inspire similar action in other countries, and it will definitely make a contribution in increasing awareness about corruption in Sri Lanka.

The pictured featured above is from tisrilanka.org.