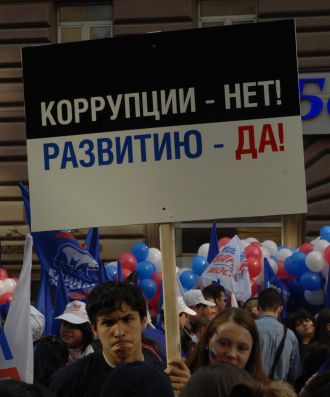 Corruption is a big problem in Russia. According to international indicators of corruption, it is considered the most corrupt of the emerging economies. However, for a long time Russian governments did nothing concrete to attempt to fight the problem. This seemed to change during the Medvedev administration, argues the report “Russia’s Anti-corruption Predicament: Reforms, Activism and Struggling Rulers”, published as part of the Corruption °C series edited by the Latvian think-tank Providus. The study, authored by Ivan Ninenko, deputy director of Transparency International Russia, analyses the reforms undertaken by Medvedev to strengthen the anti-corruption framework in the country. Although the report claims that Medvedev tried to bring the Russian legal system up to international standards, it recognises that the concrete impact of such reforms is yet to be felt.

The report begins by contextualising corruption in Russia, providing an interesting overview of corrupt practices since the Soviet period, and how corruption increased dramatically after the transition, with intransparent privatisation processes and the emergence of oligarchs and pervasive state capture. The main analysis concentrates on the anti-corruption instruments adopted during Medvedev’s term as President. Most of the achievements highlighted refer to new legislation adopted during his administration. The law “On Countering Corruption”, for instance, defined the term “corruption” in the Russian legislation and made it mandatory for public officials to disclose their income and assets and report any conflict of interest. Another important reform was the law “Providing Access to Information on Activities of Government Bodies and Municipal Bodies”, which was adopted in February 2009, granting Russian citizens access to public information. In July 2009, the law “On Anticorruption Expertise of Legislative Acts and Draft Legislative Acts” was adopted and introduced an obligation to check all new laws on possible corruption risks. Finally, in 2011 Medvedev also introduced higher punishment for bribery, amounting to 25 to 100 times higher than the sum of the bribe, eliminating the mandatory prison sentence for large bribes. This law aimed at decreasing the financial incentive for bribes, and although it was controversial at first, it is considered to have had an overall positive effect.

Although it claims that these legislative changes are considered to be important steps forward, the study makes it clear that there are numerous problems in the implementation of the new legislation. The sanctions for not complying with disclosure requirements imposed by the law “On Countering Corruption”, for instance, were rather insignificant and rarely enforced. By the beginning of 2012, Medvedev himself stated that this law was very inefficient. The implementation of the law of access to information is also limited in practice by the non-cooperation of certain state agencies and institutions. On the other hand, some good examples exist. Commercial courts in Russia have done incredible efforts to increase transparency about their cases, publishing not only all their decisions but even documents received as part of each case, including requests from government officials to “take a deeper look” into some cases. According to some judges, this degree of transparency led to such requests becoming rarer, thus ultimately contributing to reducing attempts to influence the courts’ proceedings.

What we can conclude from this analysis is that Russia, at least during the Medvedev government, appears to have taken the same route as many others countries plagued by systematic corruption: strengthening anti-corruption regulation. However, as also happened in many countries, these changes were not as effective as expected. The report concludes that Medvedev failed to make the government’s anti-corruption efforts credible, and most of the initiatives did not bring any significant improvement for the lives of citizens and businesspeople affected by widespread corruption. Nevertheless, other important developments have taken place in the civil society arena in the meanwhile. Increased access to internet and technology has enabled civic activists and bloggers to mobilise more people against corruption, and initiatives of individuals exposing wrongdoing by public officials online have increased. The main hope is that this rising pressure from Russian society will eventually contribute to bringing about real change in anti-corruption efforts in the country.

(The picture featured above is from themoscowtimes.com.)