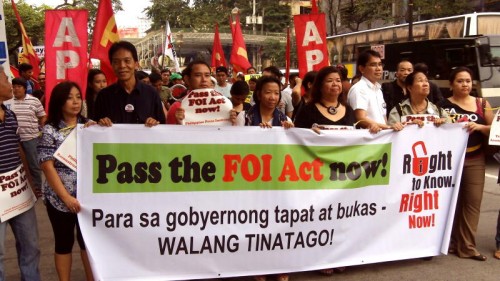 Some common dynamics can be identified across regions in some of the study’s findings. A first important trend that can be observed is that civil society has had a fundamental role in pushing for freedom of information legislation in most regions, and even more so in countries where these laws have been passed more recently. The report documents numerous cases of broad civil society coalitions that have successfully pressured governments and Parliaments to discuss and adopt explicit legislation protecting access to information to all citizens. In some cases, such as Japan, Mongolia and Indonesia, these coalitions have succeeded after long-lasting campaigns to mobilize political support for the issue. In others, such as Philippines, Cambodia and Malaysia, despite campaigning for over a decade these coalitions have not yet prevailed over governments’ resistance. In Europe the creation of broad coalitions in favour of right to information has also been observed in a number of countries, including the United Kingdom, still in the 1980s, Spain and most recently Croatia.

At the supra-national level there have also been important developments in many of these regions. In Africa, for instance, several regional charters for the protection of rights include provisions for right to public information. In the American continent, the Organization of American States has worked to develop a model draft law by request of its member states, which should function as reference for freedom of information laws passed in the individual countries. In the Pacific region, much pressure for the adoption of freedom of information provisions in the national legal system is exercised by international organisations and donors, although very few countries in this region have passed a law in this regard and no supra-national framework or guideline has been established. Most emblematic is the situation in Europe, where European Union directives represent a great portion of legal provisions protecting right to information, and even enabling access to information across borders. More broadly, the Council of Europe has adopted the Convention on Access to Official Documents in 2009, which still needs to be ratified by other four members before it comes into force. Regional civil society networks, such as the Africa Freedom of Information Centre (AFIC) and the Alianza Regional in Latin America, also appear as important developments beyond the national level.

Additionally, great advances in information technology applied by civil society have contributed to disseminating access to information in some regions. In Europe, for instance, initiatives such as the British portal WhatDoTheyKnow.com and AsktheEU.org enables citizens to send information requests and documents responses making them publicly accessible.

Despite many positive developments, some challenges remain for furthering freedom of information across the globe. In several regions, a culture of secrecy in the public administration is still predominant in some countries, especially those with a past of authoritarian and oppressive regimes. In Africa, for instance, this was maintained even after liberation movements eventually came to power. As they had lived clandestinely before, the perception of secrecy as a means of survival has strongly influenced some post-colonial administrations following the victory of such movements. A lack of awareness among the population about the right to information is also a significant problem in some regions, and further civil society engagement to inform people and strengthen public demand for more transparency is still needed. Moreover, sometimes the danger lies in the manipulation of freedom of information legislation with the purpose of disguisedly restricting civil liberties. This can take place In particular in regimes that are often described as electoral autocracies, such as Zimbabwe, for instance, where a provision that punished “abuse of free expression” has been used by the government of Robert Mugabe to control criticism towards the government.

One important lesson that remains from civil society’s experience in several countries is the need for constant monitoring, giving the not so uncommon risk of backlash in the protection of access to information. This has been seen in South Africa, for instance. The first country in Africa to adopt freedom of information legislation, in 2000, it has recently passed a Protection of State Information Bill, popularly known as “secrecy bill”, which endangers some guarantees for freedom of information in the name of national security and anti-terrorism measures. In Hungary, also a pioneer in passing a freedom of information law in Eastern and Central Europe, recent propositions to amend the legislation in order to restrict the scope of information accessible by the public have raised concerns. Luckily civil society has strongly reacted against these negative developments, but these cases show that nothing guarantees that access to information will be forever guaranteed once it is first established.

(The picture featured above is from pcij.org.)