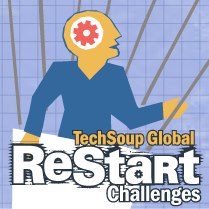 Since 2011, the ReStart Challenges initiative, organised by TechSoup Global, has been promoting competitions and selecting innovative projects based on the implementation of new technologies in fighting corruption and promoting transparency. The first edition took place in Romania and received applications on 145 project ideas, among which five projects were selected. Since then, other editions have taken place in Czech Republic and Slovakia as well and have collected over 1,000 project ideas. New rounds are planned also in the Western Balkans.

The challenges are based on a public voting and jury process, that selects seven finalists ideas per challenge. These ideas are then developed as prototypes and have the chance of a final “pitch”, where three to five of the most convincing projects are selected for launch funding and incubation. One of the first winner projects to receive a US$ 5,000 grant was Bribe Market, created by Codru Vrabie. The main idea behind this initiative was a mechanism for the reporting of bribes via mobile phones in Romania. Differently than other similar bribe-reporting platforms such as I Paid a Bribe, the project had a free-market twist: individuals can rate the “value for money” of each bribe, and can thus identify the relatively “cheapest” bribes.

Another one of the winning projects in Romania was Lost Money, proposed by activist Elena Calistru. The project tracks public spending and aims at offering citizens at large a tool to understand how the budget is made and how their taxes are spent. Through dynamic infographics, the platform centralizes public financial data and maps the spending in a way that is accessible to the ordinary person.

In Slovakia, one of the winning projects of the Restart campaign in 2012 was Open Courts, created by the computer science students Pavol Zbell and Samuel Molnár. Interestingly, the project was motivated by a very simple fact: they were looking for information on a legal case and couldn’t find it due to the poor information management of the Department of Justice in Slovakia. Therefore, they decided to make their own contribution to facilitate access to data on judicial decisions – their database includes material on almost 400,000 decisions since 1997. The data is presented in a user-friendly way and shows connections between judges, plaintiffs and defendants. Now others seek to implement the same programme to collect and manage information on politicians’ business holdings or public procurement contract disputes, to increase the potential of cross-linking all this information and potentially finding cases of conflict of interests and favouritism.

Like ReStart Challenges, initiatives to foster social innovation, especially combined with the application of new technology, are multiplying and causing great impact. By supporting new ideas on how to improve transparency, inform and engage citizens and monitor government, they make an important contribution for the emergence of new solutions to help fight corruption in several countries.