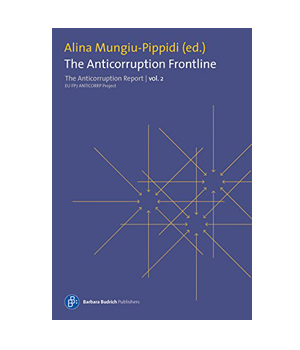 Can social science impact policy in real time and offer relevant options for major problems that our societies face today? This is the challenge taken up by the policy pillar of the EU FP7 project ANTICORRP which deals with good governance and anticorruption policies. ANTICORRP is a five-year project based across 20 European universities and research institutes. The head of the policy pillar, Alina Mungiu-Pippidi, a professor at Hertie School of Governance and director of the European Centre for Anti-Corruption and State-Building in Berlin has organized work so that once a year, relevant new data, analyses and solutions are published in the form of a policy digest published by Barbara Budrich and widely distributed both in electronic and print format. The series was initiated last year with the first volume, ‘Controlling Corruption in Europe’ and has continued with the second volume, ‘The Anticorruption Frontline’ which was released this fall at the OECD Anticorruption Network Meeting (Eastern Europe and Central Asia Plenary) on 10 October 2014.

“I frequently hear the complaint that social science projects are de facto decoupled from policy and that the findings miss the window of opportunity to inform policy,” Mungiu-Pippidi says. “There are good reasons for this, primarily because the academic publishing cycle is slow and the focus is different from policy. If you study corruption, however, you have to be relevant for policy when your problem becomes salient. Which, in the case of corruption, is now.”

The core argument of ANTICORRP, a title which translates as ‘anti-body’, is that control of corruption is an equilibrium between opportunities and constraints for corrupt behaviour. To improve on it, good instruments are needed to trace change across time and understand if a policy intervention works or not. Each volume of the series thus has a special section dedicated to indicators as researchers struggle to move away from perception-based indicators such as the Corruption Perception Index to concrete ones which allow comparisons across time. The use of such indicators seriously shakes common knowledge: in the current volume of the report, researchers show that the widely used perception indicators overrate Qatar and Rwanda (two excellent reports are dedicated to each), that EU funds increase corruption risk in Hungary and Czech Republic (Hungarian researcher Mihaly Fazekas also published his innovative indicators measuring risk in public procurement in the first volume) and that Bulgaria failed in its anticorruption efforts despite serious push from the EU. What control of corruption consists of is documented in every volume with new evidence – this time, across three different datasets. Hertie School researchers are currently working to develop an interactive website instrument, which would allow countries to calculate their own corruption risk: to see where their vulnerabilities are and thus get tailored recommendations. “Our work shows that silver bullets do not exist” Mungiu-Pippidi says “but it also shows that the balance can be tipped to one side or another by smart policies. We developed a reliable statistical model which is based only on human agency factors. If there is a will, we show the way to develop the needed anti-bodies, but the prescription is different for every context. As doctors say, there are no two patients alike, so we combine good individual diagnosis with a limited set of tested instruments in various combinations.”

ANTICORRP researchers are doing policy work for the Council of Europe, OECD, European Court of Auditors and DG Home, among others. Hertie School was recently commissioned to do a synthesis of policy relevant findings in the EU for the Dutch government to assist in their preparation for assuming presidency of the European Council in 2016.

Selected chapters from the report are available on the ANTICORRP project website, together with more academic publications and deliverables of the project. Printed copies can be ordered here.