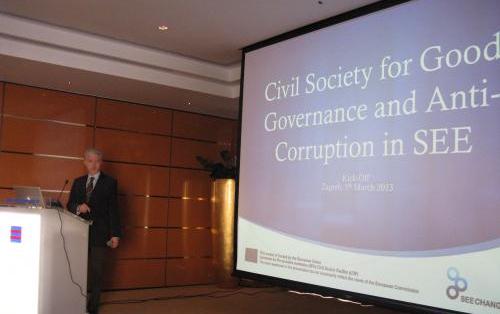 Corruption is one of the most pressing issues in Southeast Europe, because of its detrimental impact on the social and economic development, especially during times of economic crisis. At the same time, the capacity of civil society organisations to monitor corruption and contribute to policy change in the anti-corruption field remains low. In order to address this issue, 17 civil society organisations from nine countries have mobilised to form a coalition that aims at strengthening civil society’s role in influencing policy and the decision-making process in anti-corruption and good governance in the region.

The coalition, entitled Southeast Europe Leadership for Development and Integrity (SELDI), was created in November 2012 by organisations from Albania, Bosnia and Herzegovina, Bulgaria, Croatia, Kosovo, Macedonia, Montenegro, Serbia and Turkey. The network is coordinated by the Centre for the Study of Democracy (Bulgaria), which acts as its secretariat, and is the continuation of the Southeast European Legal Development Initiative (SELDI), established in 1999 by leading non-profit organisations, representatives of government institutions and experts from these nine countries. This initiative aimed at public-private coalition building for legal development in those countries and provided a forum for cooperation among the most active civil society institutions, public figures and government and international agencies the region.

In March 2013, the network held its opening conference in Zagreb, Croatia, and is currently preparing an Inception Conference and Policy Workshop to be held on 21-22 May 2013 in Belgrade, Serbia, where final consultations and the approval of its Strategy and Action Agenda will take place. The coalition’s strategy is based on three pillars: capacity building, advocacy and watchdog. Through these different lines of work, SELDI seeks to strengthen the position of civil society coalitions as partners of governments and international organisations active in Southeast Europe, in putting the good governance and anti-corruption issues firmly on the policy agenda. The coalition also aims to promote increased publication quality of media on these issues and initiate change in the attitudes of the society in order to decrease tolerance to corruption and lower corruption pressure.

One of the activities planned as part of its watchdog role includes the continuation of corruption-monitoring efforts that have been implemented earlier as part of the Legal Development Initiative. In 2001 and 2002, the first unified regional corruption monitoring exercise employing CSD’s Corruption Monitoring System was conducted, and SELDI will carry out a similar evaluation in 2014 using the same methodology as in two previous rounds, in order to deliver a unique view of anti-corruption progress and gaps in Southeast Europe.

1. Center for the Study of Democracy, Bulgaria