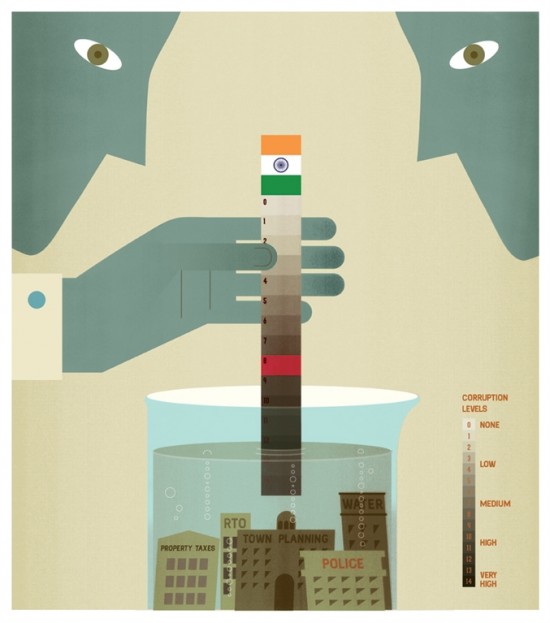 A new citizen-led initiative from Bangalore, India, called ‘Shudhify’, offers local citizens a valuable map of selected government services and their respective ratings in different districts of the city. The data collected by the project tracks the quality of service provision, as well as the level of efficiency and corruption in the offices covered. The primary goal of the project is to contribute to change the common perception that corruption gets business done quicker. The project is supported by the World Bank Institute and Colgate University.

The local datamap developed by the project originates mainly from a nine-question survey conducted on site with users of government services in Bangalore. So far, the project has focused on collecting data on transport offices and police stations, and other branches of service shall be explored later. The project’s team has also collected documents on corruption cases archived at government investigation agencies and cases of bribery reported by another pioneering Indian initiative called ‘I paid a bribe’, all of which are used to compose the assessment of each selected office. The resulting information is available on the project’s internet portal (www.shudhify.org), where citizens can also rate public services themselves.

The project has been implementing a broad dissemination strategy through the press, academic journals, and other online platforms. Moreover, it organizes weekly ‘dares’ in partnership with theatre groups and colleges, in order to engage citizens, give additional visibility to the project’s results and increase public pressure on government officials to improve their performance. One of such dares, for instance, asked people to go to the most corrupt/least efficient unit of the Regional Transport Office (RTO), sing the national anthem and place in the middle of the building copies of the ratings produced by the project.

More detailed information about the project is available in a case study produced by the Global Youth Anti-corruption Network (GYAC). An interview with Srikar Gullapalli, one of the project’s initiators, is also available on the GYAC website. The article “Should I or Shudhify?“, available on the Colgate University’s Connect platform, also provides more information on the background story of the project. The illustration above, by Andrew Baker, is featured in the article.