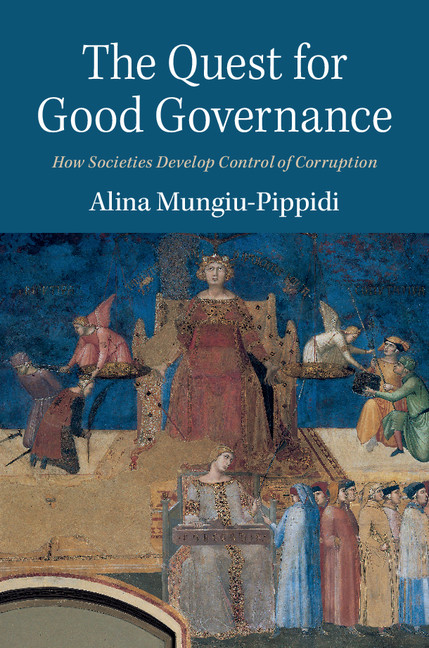 “This is one of the most important books ever written on the most universal governance challenge of our time – how to control corruption.” These are the words of Larry Diamond, the director of the Center on Democracy, Development and the Rule of Law* from Stanford University about Prof. Alina Mungiu-Pippidi‘s new book The Quest for Good Governance How Societies Develop Control of Corruption, available from September 2015 from Cambridge University Press.

Mr Diamond stated: “In this brilliant integration of theory, history, case studies and quantitative evidence, Alina Mungiu-Pippidi shows how countries move from the natural state of corruption, clientelism and particularistic governance to the impersonal norms of fairness, integrity and transparency that make for good governance. This is an indispensable work for any scholar, student or policy-maker who wants to understand how societies mobilize and states reform to control corruption.” This is not a book on corruption as crime, as this except shows:

“Tarek al-Tayeb Mohamed Bouazizi was a 27-year-old Tunisian street vendor who set himself on fire on December 17, 2010, in protest of the confiscation of his wares following an accusation by officials that he was trading illegally and evading taxes. That street vendor’s action started the fires of the Tunisian Revolution and then the wider Arab Spring, and he was instantly cast as a hero by the global anticorruption community. After all, then-President Zine El Abidine Ben was a typical corrupt leader with a wife who had built herself an unauthorized villa at the Carthage UNESCO heritage site. But he could also have argued that since people like Bouazizi had never paid taxes, there were insufficient public resources to offer them much in the way of education or health care. In other words, beyond the paradigm of predator and victim – two parts with ideally cast actors in this particular circumstance – what seems to be the problem in the Tunisian situation is the absence of an agreed social contract between these actors-only such a contract would give development a chance.”

Alina Mungiu-Pippidi takes up the challenge from where renowned authors Daron Acemoglu and James Robinson had left it in “Why Nations Fail”. If the difference in economic performance is accounted for by governance, what explains why so few countries engage on the path of open and inclusive government versus one limiting access and spoiling its subjects? She argues that corruption starts historically being the norm before being the exception, and that in over eighty electoral democracies of the present spoiling of public resources by ruling elites has become the rule of the game and the number one collective action problem.

Mungiu-Pippidi, the Democracy Chair at the Hertie School of Governance in Berlin, who also developed aggressive anticorruption methodologies based on naming and shaming for MP candidates as well as integrity rankings of public universities in her native Romania travels in this book from 12th century Siena to present day Estonia or Uruguay to deconstruct and learn from virtuous circles: the evolution of politics from a game of public spoiling to the maximization of social welfare. She is also merciless towards current anticorruption industry, which she sees as far too complacent and too concerned to generate work for itself rather than attack the problem and places her bets instead on the new media and civil society. Countries with more Facebook subscribers or Internet household connections have superior collective action capacity against predatory elites, she finds. Her research draws on the largest social science grant awarded by EU within its research framework projects, the 10 million ANTICOORP (anticorrp.eu). Professor Mungiu-Pippidi is also the main author of a report on how to redress integrity in the European Union for the forthcoming Dutch EU presidency (to be released January 2016).

*as stated on the backcover