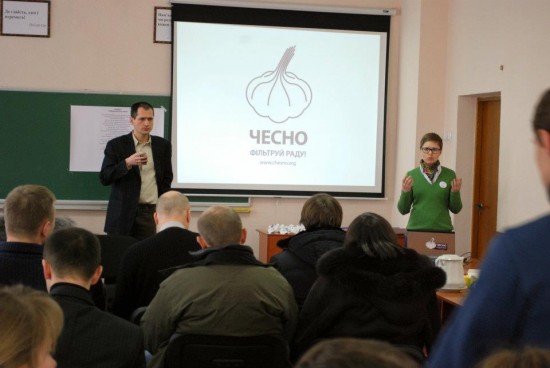 Since its founding in November 2011 until the parliamentary elections last October, the Ukrainian civil society coalition CHESNO (from Ukrainian: ‘honestly’) mobilised a large group of citizens all over to country to improve accountability of political parties and candidates prior to the elections. Its campaign “Filter the Rada!” evaluated over 2,700 candidates to Parliament on six integrity criteria, and sought to better inform voters about whether those candidates were apt or not to take office and represent the people. Now, a few weeks after the elections, the movement has met to review the initiative’s impact on the election results, and discuss plans for the years ahead, with an eye on the next presidential election in 2015.

The CHESNO movement was initiated by civic activists and members of 12 organisations in the “New Citizen” partnership, and was later joined by more than 150 organisations from over 35 cities in Ukraine, thus becoming a broad horizontal network with regional representation. The initiative was sponsored by several donors, including Pact’s USAID-supported UNITER project, the Swedish International Development Agency (SIDA), the Canadian International Development Agency (CIDA), and the International Renaissance Foundation. The movement was inspired by similar campaigns implemented in other countries, including Romania, South Korea, Bulgaria, Albania, Kosovo, Moldova and Slovakia.

The methodology developed to evaluate MPs running for re-election and other candidates to Parliament included six integrity criteria: 1. no violations of human rights and freedoms; 2. steadiness of political position in accordance with the will of the voters; 3. no involvement with corruption; 4. transparency of declared income and property, and their consistency with candidate’s lifestyle; 5. personal voting in the parliament; and 6. participation in sessions in Parliament and of Parliamentary committees. These were the product of large civil society consultations and were later confirmed through a sociological survey conducted by the Democratic Initiatives Foundation in December 2011, where the vast majority of Ukrainians endorsed the adopted integrity criteria.

The assessment was conducted by around 70 trained analysts, who collected information from publicly accessible sources, which were disclosed in all candidate profiles. Moreover, the campaign allowed for outside contributions: around 200 files with information on politicians were received from journalists and citizens, and they were later cross-checked by analysts. Each profile was sent to the respective politician and political party before publication, and they had the opportunity of presenting counter-evidence to the information presented in the case of inaccuracies, based on which the movement’s council could decide to make alterations to the original profile.

All the profiles were then published online on the so-called “Chesnometer”. Out of the 2,700 candidates assessed, more than 900 violated at least one criterion. This output of the project received particularly extensive media coverage, which further contributed to improve the visibility of the initiative and its evaluation results. Another important achievement related to this part of the project was that a permanent database with information on Ukrainian politicians was generated, and remains a valuable resource for citizens and media even after the elections.

In their final forum on December 5th, CHESNO participants, together with journalists, representatives of international organisations and also newly elected Members of Parliament (MPs), discussed relevant issues for the next elections, including strategies to improve compliance to the integrity criteria by the new MPs and by political parties, and how to involve the private sector in monitoring the government. The coalition plans to closely monitor current MPs during this legislature to ensure systematic public control over the government and the parliament. CHESNO representatives also said that they have been approached by representatives of civil society from Poland and Czech Republic with requests to share their experience in the “Filter the Rada!” campaign, thus showing potential for dissemination of the strategies adopted in Ukraine to other countries in the region.

The picture featured above is from www.upflund.se.