New report shows that women are disproportionately affected by corruption, especially in poor and marginalised environments 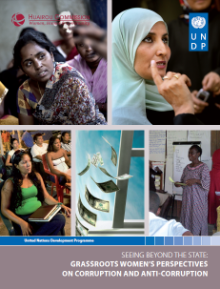 The United Nations Development Programme (UNDP), together with the Huairou Commission, released a report on the relationship between gender and corruption at the 15th biennial International Anti-Corruption Conference (IACC), held on 7-10 November 2012 in Brazil. The report, entitled “Seeing beyond the State: Grassroots Women’s Perspectives on Corruption and Anti-Corruption”, was presented during a side event on “Mainstreaming Gender and Incorporating Grassroots Women’s Perspectives in Global Anti-Corruption Initiatives and Agenda”, organised by UNDP. The study addressed the issue from two perspectives: how to empower women locally by raising visibility of their actions, and how to identify ways to reduce the impact of corruption on women.

So far the relationship between gender and corruption has not been adequately investigated, despite the fact that the misuse of power which corruption represents can be experienced differently by women and men. The study adopts a bottom-up approach to understanding corruption in order to evaluate its impact on previously neglected groups, such as women living and working in poor and marginalised communities. The report is based on the study of 11 communities across eight countries from three continents.

One particular example of how corruption can affect women differently is illustrated by Priya Pillai, strategic planner at the Best Practices Foundation, a partner of the Huairou Commission. She explained that grassroots women often experience corruption in the form of “physical abuse, sexual favours, and giving and taking of bribes when accessing basic services”, and that general definitions of corruption should incorporate such experiences.

The ways in which women experience corruption vary in accordance with the context, the study shows: “As primary caretakers of their households and communities, grassroots women experience corruption in enrolling their children in schools, denouncing physical abuse against family members, partaking in government subsidised programmes and participating in electoral processes. […] they are far more likely than men to be engaged in vulnerable employment and their unpaid care work is undervalued. Due to social and cultural discrimination, corruption impacts them disproportionately.”

The authors conclude that corruption has a negative impact on the empowerment of women and their participation in grassroots initiatives. Yet, women also have a key role in fighting corruption in communities, and their strategies are worth presenting. The report highlights that, because they are “facing corruption in their everyday lives, women from marginalised communities know best how to deal with corruption in the way that both empowers them and increases the quality of life of their families and communities.”