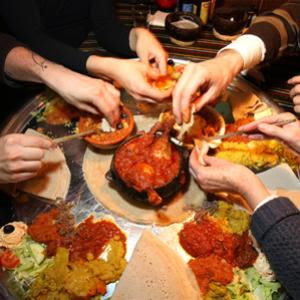 Prominent Greek politician and former Deputy Prime Minister Theodore Pangalos sparked controversy in 2010, a few months after Greece’s first bailout package, after he claimed on television that everyone, not just politicians, were responsible for the squandering of public money. “We all ate together”, Pangalos said at the time. He then elaborated his statement in an interview on Skai TV saying that “every citizen is responsible in a democracy”, and that his remarks referred to widespread clientelism, tax evasion and corruption in the country.

Recently, Mr. Pangalos made the headlines again with an initiative to expose and fight corruption in Greece. The project consists of a website where people are invited to share their experiences of corruption. The webpage, named afters his famous statement “We all ate together” (“mazi-ta-fagame” in Greek), has already become extremely popular, with aproximately 100,000 page views per day, and has even crashed several times due to the overwhelming demand.

The website, which is currently available only in Greek, contains self-told stories of corruption experienced by individuals in their daily life. For example, a user reported being asked to pay between 20 and 30 euros to the owner of a coffee shop in order to avoid the queue at the nearby local tax office. Another citizen said that he had been asked for a bribe at a public hospital, so that his wife would give birth.

An article by Judy Dempsey on carnegieeurope.eu reflects on the meaning of the new website for Greek society, stating that “[f]or the first time ever, Greeks are posting how they have to pay bribes for almost every service”, and that the initiative “[i]s an astonishing account about what Greeks have tolerated over the decades”.  Dempsey also highlights that Mr. Pangalos’s website is an important tool for fighting corruption, by providing a platform for communication and citizen initiative, and “[…] is helping to encourage a grass roots movement for citizens who, burdened by the austerity measures, are no longer prepared to remain silent over the bribery and corruption.”

As a result of mazi-ta-fagame.gr, Mr. Pangalos has published a book online with selected corruption anecdotes posted on the website. The book also comprises information on cases of gross mismanagement of public funds. As reported by The Pappas Post, a statement by Mr. Pangalos on the website highlights that he intends to “‘educate’ Greeks on the need to break away from the political clientelism”, and that the project’s goal “is to develop the book, with the participation and assistance of readers, using the methodology and tools of crowdsourcing”. New versions of the book shall be compiled and distributed with other stories later on.

The picture featured above is from the blog ‘Connecting Food to People’.