Uganda, the target of many Western donors anticorruption policies has been lagging for the past decade, even on the relatively costless policies of reducing administrative discretion and increasing fiscal transparency. In the absence of freedom of the press, its whistleblower protection act did not have any impact (whistleblower journalists were arrested, even from the BBC). Selective enforcement and discrimination resulted also from an anticorruption deprived of autonomy. Citizen empowerment by way of extending Internet and Internet literacy, on one hand, and transparency and digitalization reforms, to make public services more accessible, on the other seem the only feasible ways ahead in the absence of some major political overhaul which would shake the existing structure of established rents. Global Corruption Barometer 2019 records very high disapproval of the government anticorruption policies.

Researchers at the Basel Institute on Governance have been working on developing and applying a new analytical framework to assess governance and corruption risks within the public administration. With a focus on the health sector, the research project ‘Governance of Health Systems’, conducted jointly with the Swiss Tropical and Public Health Institute, aims to contribute to the study of governance, especially in low-income countries, and to propose improved governance-enhancing interventions in health services.

An interesting feature of their approach is the mapping of both formal and informal institutions, actors and networks. Similarly to the theoretical orientation followed by ERCAS on its research activities, their analysis emphasises the need to understand how the interplay of formal and informal norms affects a country’s or a particular sector’s governance regime, in order to be able to effectively address identified weaknesses.

Therefore, the proposed methodology draws from both political economy and sociology research and incorporates political power and influence analysis to provide a more comprehensive understanding of the motivations and incentives underpinning the actions of major stakeholders in the health sector. The framework is described in detail in the Basel Institute on Governance Working Paper “A Framework to Assess Governance of Health Systems in Low Income Countries” (No.11/July 2011), by Claudia Baez-Camargo, the project’s lead researcher. 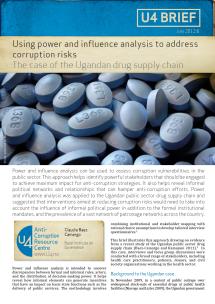 In a more recent paper also authored by Ms. Baez-Camargo and published in July 2012 as a brief by the U4 Anti-Corruption Research Centre, the framework is applied to the case of the pharmaceutical supply chain in Uganda. The paper brief, entitled “Using power and influence analysis to address corruption risks: The case of the Ugandan drug supply chain”, discusses how power and influence analysis was used to assess corruption vulnerabilities in the Ugandan health sector, concentrating on inefficiencies in the distribution of drugs and medical supplies. The study identified powerful stakeholders and informal political networks and relationships that have great relevance for the design and implementation of anti-corruption efforts in Uganda. It concludes that interventions aimed at reducing corruption risks in the health sector need to take into account the prevalence of a vast network of patronage relationships across the country.

This study shows how the analytical framework proposed by researchers at the institute can offer empirical applicability to address specific policy problems emerging from a mismatch between formal and informal institutions, by shedding light on political constraints that are sometimes neglected in the design of governance-enhancing interventions.

A story published by the Associated Press (AP) last week revealed that most countries with Freedom of Access to Information laws do not follow them properly. In a test with over 100 countries with such legislation, more than half failed to provide the requested information and only 14 disclosed the data within the legal deadline.

The study was the first worldwide attempt to verify to what extent these laws are being effectively implemented. During an entire week in January AP journalists sent requests of information about terrorism arrests and convictions to 105 countries and the European Union.

In the small group of governments that processed the requests in a timely manner are, for instance, Guatemala, which sent the documents after 10 days, and Turkey, which needed only a week to reply. Canada and the United States, on the other hand, needed more that six months to provide the information, and in the latter case part of the data was censored. More than 40 countries never acknowledged the request or refused to provide the information on the basis of national security.

The results point out to a trend of countries’ adopting this kind of legislation as a result of pressure or incentives from international organizations, however without any intention of implementing it. In some countries, such as India and Uganda, there have even been cases of political persecution against individuals who tried to make use of right-to-know laws.

Read the full article AP Impact: Right-to-know laws often ignored on hosted.ap.org. More details about the results of the study can be accessed on AP’s Facebook page. The agency is also accepting suggestions for future information requests to be made in the next parts of their Freedom of Information project. The picture shown above is credited to AP.