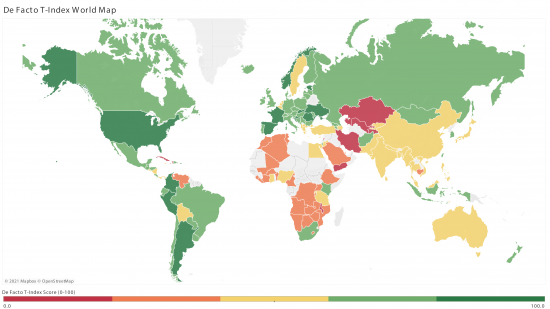 Why a new measurement of transparency?

At ERCAS we are particularly interested in the relation between transparency and corruption, and the claim that the former helps to reduce the latter. To study this we need a more direct and fact-based measurement of transparency. This is our goal with the T-Index: to supply a tool that measures actual transparency, focusing on capturing dimensions that are relevant for controlling corruption.

We also introduce an important distinction between de jure and de facto transparency. A real divorce can exist between formal (de jure) laws and concrete policy (de facto) practices, as ERCAS has shown in our previous research. Existing comparative measures of transparency rely mainly on the formal side. What we propose is to assess also de facto transparency, and we do this by observing directly the existence of public data in relevant domains, its accessibility and coverage, i.e. the practice of transparency rather than just the legal provision of it or its formal presence.

What concept do we measure?

We define transparency as the available and accessible (free of cost) minimal public information required to deter corruption and enable public accountability in a society. We consider the possibility, often ignored, that corruption is deterred to a great extent not by offensive actions against it, but by the capacity of every individual to defend him/herself from being abused and discriminated against. Government transparency thus implies that reliable, relevant, and timely information about the activities of government is available to the public, enabling it to defend itself from discrimination resulting from governance based on favouritism and abuse of power. We also take into account that, in the age of the Internet and e-government, transparency often becomes computer-intermediated, and there is evidence that technology enables transparency. Therefore, we focus on the online availability of information as the existence of actual transparency.

How do we select the indicators?

Building a transparency index requires that we select appropriate transparency indicators to be then weighted and aggregated into a composite index. Transparency is not a unidimensional concept, and at least two distinctive categories can be conceived, namely legal (de jure) and in practice (de facto, real) transparency, therefore we measure two sets of indicators.

For the de jure T-index, we include 6 legal documents encompassing freedom of information legislation and international agreements with transparency provisions, establishing national and international transparency benchmarks that a country adheres to. The most used transparency measures rely on adopted FOI acts. Other relevant rules and conventions with key transparency provisions were also checked: the Extractive Industry Transparency Initiative (EITI), the United Nations Convention against Corruption (references to transparency in practically every chapter), the Anti-Money Laundering Convention, and the OECD anti-bribery convention. Countries pledge transparency also when joining the Open Government Partnership. While international treaties have weak enforcement in general, all the above do have clear monitoring mechanisms, unlike other pledges for transparency that countries make (for instance, associated with free trade agreements).

The de facto T-index in turn has 14 dimensions, inspired mainly by provisions defined in the United Nations Convention against Corruption (UNCAC) and the Sustainable Development Goal 16. They are grouped into three meta dimensions which capture basic transparency provisions for effective anti-corruption, i.e. what any nation should have to enable control of corruption, a minimal core of Internet-based resources:

Components are equally weighted to calculate the resulting indices. In order to fit our purpose, we use a qualitative method similar to building an index of qualitative variation (IQV). For the de facto score, the availability of the 14 resources in full is considered the ‘anticorruption transparency’ target, and each component adds up equally to fulfil it to 100%, which is the equivalent of the maximum score of 14 points. A country’s score represents the percentage to which the target is fulfilled. The same logic is applied to the de jure index and to the compound index that adds de jure and de facto transparency.

Read more about the index components on the T-index methodology paper.

How do we validate the results?

As we are particularly interested in the relevance of transparency for anticorruption, we also look at the association between the T-Index dimensions and final score and selected indicators of corruption, as well as other indices that aim to capture government transparency. Estimated correlations between the T-Index and Transparency International’s CPI, the World Bank’s Control of Corruption indicator and V-Dem’s corruption measure show a very similar association close to a 0.5 coefficient for the de facto and total scores, and around 0.38 for the de jure dimension.

As to other indicators that capture government transparency, we see a strong positive association (0.65 for de facto, 0.59 for de jure and 0.69 for the total score) with the IPI, which includes fiscal transparency as one of its six components, and with the UN E-Participation Index, with similar coefficients.

Why and how should you use this index?

The T-Index can bring important advantages to public policy and good governance. It can help to establish benchmarks of transparency and, thus, inform a very specific reform agenda. It also offers an international ranking based on facts, not perceptions, which may not only incentivize countries to progress but also offer specific policy targets. Finally, it can allow policy-relevant research, as the resulting measurement can be tested in relation to curbing corruption.

Do you want to review your country’s score and dig deeper into its components? Download our database: ERCAS Transparency Data (15.11.2021).