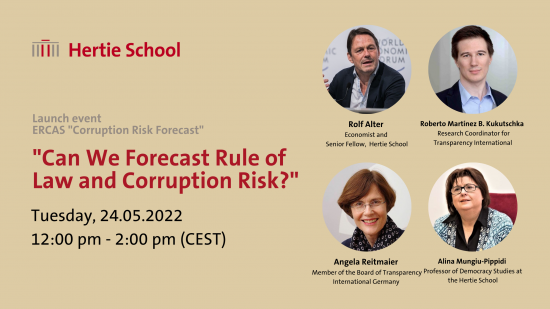 Why does the world seem such a worse place out of a sudden? ERCAS’s newly launched Corruption Risk Forecast allows a more granular view into rule of law and control of corruption developments in over 120 countries. Register

The V-Dem Project finds only 34 liberal democracies left (home to only 13% of the world population), down from 42 in 2012. The World Justice Project reports 74% declining countries on their rule of law index (which also includes corruption), accounting for 84.7% of the world’s population. As we do not have a universally acknowledged ‘rule of law threshold’, we need to triangulate using several indicators to understand if the trends are indeed so negative and how can we predict future developments.

Join us for a presentation followed by a roundtable discussion on the global trends in rule of law and control of corruption based on ERCAS’s newly released analytical tool. The tool surveys 120 countries for 12 years relying on objective and actionable indicators, such as press freedom or judicial independence, and on the first-ever fact-based transparency measurement for 130 countries.