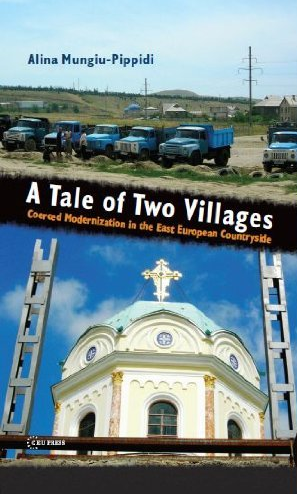 A non-fiction book about the social engineering operated in rural Eastern Europe by the Communist regime, based on the history of two villages in Romania. One of the two villages is the birthplace of Nicolae Ceausescu, the former Communist dictator, Scornicesti, which received massive investment during communist years and was turned into a mixture of underdeveloped village and industrial town. The other is Nucsoara, the Carpathian cradle of peasants’ resistance against Communism, where half the village was executed or imprisoned and their lands divided between the other half. The state intervention failed in both villages to attain the planned objectives, but it nevertheless changed fundamentally the life of villagers. This book is mostly about the consequences of unlimited state power over people and communities.

More information can be founds here. You can purchase your copy of the book here.

“This is a dramatic, thought-provoking and sometimes savagely funny account of one of the toughest problems in Europe: the ingrained poverty of the Romanian countryside. It deals with two villages, Scorniceşti and Nucşoaru. One was celebrated under communism as the birthplace of the dicatator Nicolae Ceauşescu. The other was a hotbed of armed anti-communist resistance. Both have been trampled by history into an unrecognisable, depopulated mush. The stories Ms Mungiu Pippidi unearths are mostly forgotten or misremembered by the people she is writing about. The European integration that has so boosted the lives of Romania ‘s urban elites is just a tinny echo. Of the billions in EU programme money she writes:

‘nobody seems competent enough to fill in one of those complex application forms with many rubrics, seemingly designed to exclude the semi-literate farmers of the underdeveloped, rural areas for which those programme were in fact intended.’

This book is an exemplary work of social history, mixing evocative anecdote with sharp analysis. The accounts of the destructive ultra-individualism spawned by the reaction against communist-era collectivism are particularly memorable (in one place, a villager saws up a bit of the railway track to use as a ceiling beam, cutting the only rail link between the village and the outside world). It deserves to be read by anyone who wonders where EU money is going and why the rural inhabitants of Romania so doggedly vote for the people and parties responsible for their misery.

Review in The Economist

“The book is positioned at the disciplinary intersection between social anthoropology, oral history, and political sciences – a rara avis in today’s climate of academic over-specialization. The story of the two post-socialist villages Nucşoara and Scornicesti in Walachia, southern Romania, follows the American tradition of exploring peasant politics and power in the manner of James Scott and Timothy Mitchell, among others.
The book has strong points. One is the multilevel approach combining the local level of analysis with the national one. The author effectively applies both ethnographic information gatherring and political science tools, such as analysis based on national data pools. Furthermore, she offers a theoretical model that can foster a better understanding of the post-socialist world.
… extremely useful for those interested in post-socialist transformation processes. It merits the attention of social scientists studyin eastern Europe“.

“Alina Mungiu-Pippidi is one of the most outspoken and courageous public figures in Romania. She is a trenchant yet constructive critic of Romanian politics and society and as a university professor has initiated and secured funding for numerous research projects into which she has drawn her students. This volume is the product of one such project and is based on fieldwork carried out in Romania with a group of her students in political anthropology. The book provides a rich and varied discussion of collectivization and its continuing effects. Twenty years after its fall, the Communist Party still casts a long shadow in the region.”