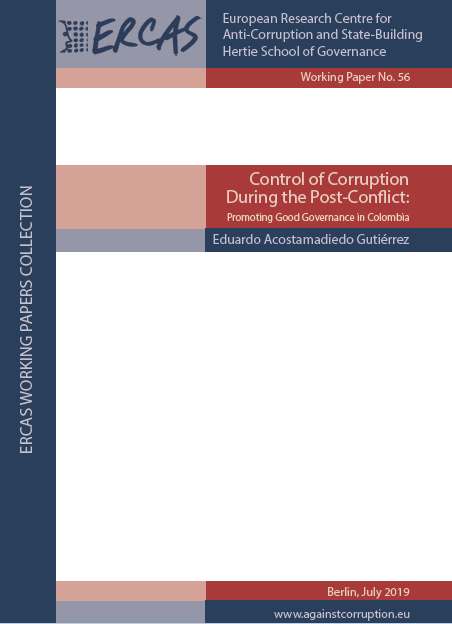 This research is focused on the Colombian Government’s flagship post-conflict and statebuilding policy from 2009 to 2015, known as the “Consolidation Policy”. The Government’s policy aimed to transform the governance in post-conflict regions from a social order functional to the armed conflict to such a social order that would promote good governance and inclusive governmental institutions.

The analysis sheds light on the limitations and achievements of the policy on the control of corruption and examines the extent to which it shaped the governance order of post-conflict regions in the short term using a mixed methods approach including a differences-in-differences estimation and semi-structured interviews. The analysis is based in the Equilibrium Theory of Control of Corruption, which identifies policy-actionable variables that promote good governance and the control of corruption. This theory was operationalized in the context of post-conflict Colombia. This research determined the changes produced by the Government policy on the control of corruption by comparing control and intervention municipalities. The analysis revealed a mixed effect on the control of corruption where the intervention occurred. The results showed that the Consolidation Policy was associated with more civil society collective actions, at least in a group of municipalities, and an increase in local government accountability to citizens. On the contrary, there seems to be no association of the policy with increments in local government procurement transparency, or disciplinary sanctions to local civil servants by the Office of the Inspector General, one of the state control agencies

The research identifies the main issues that limited the Consolidation Policy’s mixed effect on the control of corruption. First, instead of a quick-impact approach, this research recommends a gradualist, long-term approach that combines insecurity reduction and empowering citizen group’s to keep corruption in check. Second, given the limitations of the Colombian State to regulate governance in conflict affected areas, civil society should be a central partner in the initiatives of good governance promotion.