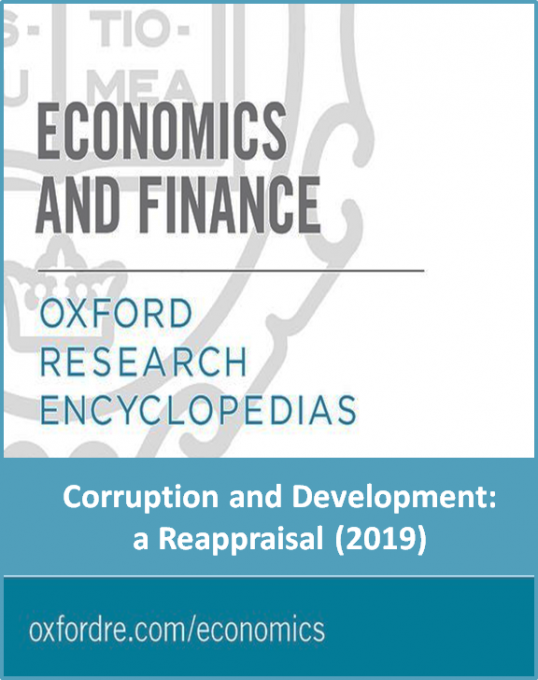 Corruption and development are two mutually related concepts equally shifting in meaning across time. The predominant 21st-century view of government that regards corruption as inacceptable has its theoretical roots in ancient Western thought, as well as Eastern thought. This condemning view of corruption coexisted at all times with a more morally indifferent or neutral approach that found its expression most notably in development scholars of the 1960s and 1970s who viewed corruption as an enabler of development rather than an obstacle. Research on the nexus between corruption and development has identified mechanisms that enable corruption and offered theories of change, which have informed practical development policies. Interventions adopting a principal agent approach fit better the advanced economies, where corruption is an exception, rather than the emerging economies, where the opposite of corruption, the norm of ethical universalism, has yet to be built. In such contexts corruption is better approached from a collective action perspective. Reviewing cross-national data for the period 1996–2017, it becomes apparent that the control of corruption stagnated in most countries and only a few exceptions exist. For a lasting improvement of the control of corruption, societies need to reduce the resources for corruption while simultaneously increasing constraints. The evolution of a governance regime requires a multiple stakeholder endeavor reaching beyond the sphere of government involving the press, business, and a strong and activist civil society.