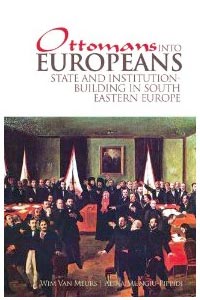 While many histories of the Balkans have been published, some very good and others poor, there is as yet no history of institutions in the Balkans. This is what the contributors to Ottomans into European offer the reader: a history of the most salient political institutions of the region: bureaucracies, judiciaries, democratic elections, free media, local and central government – and their frequently strained relations with traditional institutions. They also examine the selection, evolution, and performance of institutions in the post-Ottoman Balkans, and try to account for variations throughout the region. In writing this institutional history of the Balkans the contributors set themselves two key questions: did the post-Ottoman wave of Europeanization and Western-type institution building fail in the Balkans, and does this explain the region’s continuing political fragility? And if this is the case, are there underlying structural determinants explaining that failure which might manifest themselves again in present attempts to re-integrate the region, from Turkey to Albania?

You can find more informaiton and purchase the book here.

“In this agreeable little book Andrei Pippidi gives an elegant survey of a field that has been much studied in recent years.”

“An extremely important contribution to the scholarly literature on the Balkans. … By exploring the original transition in the Balkans – from the Ottoman Empire to ‘Europe’ – it will also be relevant to those working on the current transition in the region from communism to liberal-democracy and the EU.”
Dr Dejan Djokic, University of London

“Ottomans into Europeans examines an earlier ‘transition’ of the Balkans. The volume is a trans-national approach to the problems faced by the states and societies of the south-eastern peninsula of Europe as they emerged from dynastic empires. They aspired, however clumsily, to become again fully part of Europe with the belief that western political institutions were a source of stability and prosperity. That was before the clash between Nazi-fascism and communism brought that first transition to an end. Scholars, students and other readers interested in the current transition of the region – which could be called ‘communists to Europeans’ – will learn from this study of models, choices and change in an earlier phase of post-imperial state-building.”  Professor Stevan Pavlowitch, author, Hitler’s New Disorder: The Second World War in Yugoslavia

“For anyone interested in the Balkans this is the right book at the right time. Just as the Balkans return to Europe and Greece, given its current difficulties, returns to the Balkans, this book is a timely examination of key historical issues essential for an understanding of state and society today, especially in the light of the great project of the age, European integration.”
Tim Judah, Balkans Correspondent, The Economist