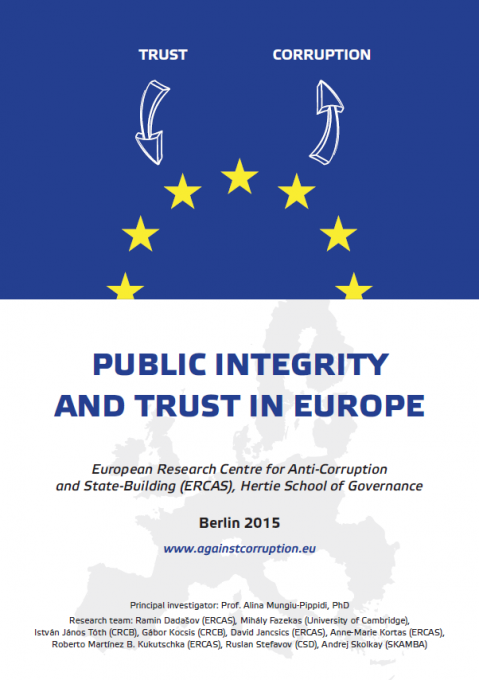 This report on trust and integrity in Europe was commissioned by the Dutch EU Presidency 2016 to a group of research institutes associated in the EU FP7 ANTICORRP project lead by Professor Alina Mungiu-Pippidi at the Hertie School of Governance in Berlin.

The report argues that economic performance alone does not explain the sometimes dramatic decline in trust in government. Europeans in many member states perceive a serious drop in the quality of governance, and the failure of current policies to redress it. Only in a minority of countries in present-day Europe we encounter a clear majority believing that success in either the public or private sector is due to merit. More than half of Europeans believe that the only way to succeed in business in their country is through political connections. Less than a quarter of Europeans agree that their government’s efforts in tackling corruption are effective. The countries where citizens perceive higher integrity and better governance are those that managed to preserve high levels of trust in government despite the economic crisis.

In pointing at these factors contributing to the growing loss of trust in national and European institutions throughout EU-28 the report takes major steps in helping to understand this crisis. It formulates lessons learned from this review if evidence and hopes to inform the policy debate on how to address the apparent lack of public integrity in Europe. The report introduces a new ranking of public integrity for the 28 EU Member States, representing the first ranking using objective measurements of public integrity in the EU.

News on this report was featured in the Greek News Agenda, the New East Platform and VoxEurop.