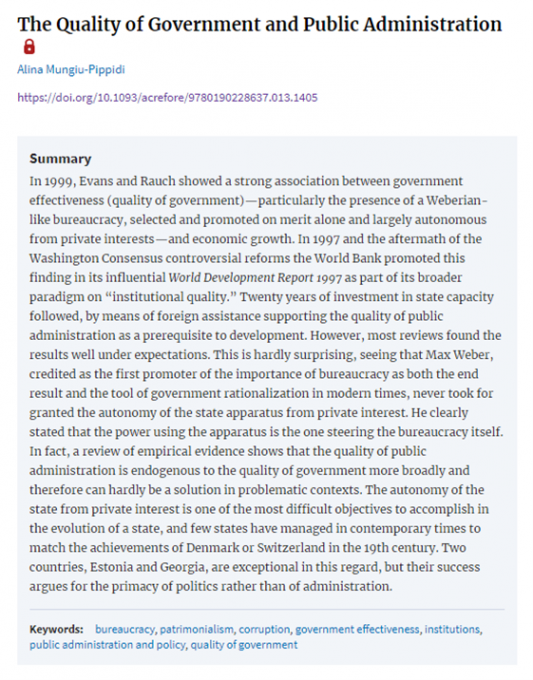 In 1999, Evans and Rauch showed a strong association between government effectiveness (quality of government)—particularly the presence of a Weberian-like bureaucracy, selected and promoted on merit alone and largely autonomous from private interests—and economic growth. In 1997 and the aftermath of the Washington Consensus controversial reforms the World Bank promoted this finding in its influential World Development Report 1997 as part of its broader paradigm on “institutional quality.” Twenty years of investment in state capacity followed, by means of foreign assistance supporting the quality of public administration as a prerequisite to development. However, most reviews found the results well under expectations. This is hardly surprising, seeing that Max Weber, credited as the first promoter of the importance of bureaucracy as both the end result and the tool of government rationalization in modern times, never took for granted the autonomy of the state apparatus from private interest. He clearly stated that the power using the apparatus is the one steering the bureaucracy itself. In fact, a review of empirical evidence shows that the quality of public administration is endogenous to the quality of government more broadly and therefore can hardly be a solution in problematic contexts. The autonomy of the state from private interest is one of the most difficult objectives to accomplish in the evolution of a state, and few states have managed in contemporary times to match the achievements of Denmark or Switzerland in the 19th century. Two countries, Estonia and Georgia, are exceptional in this regard, but their success argues for the primacy of politics rather than of administration.