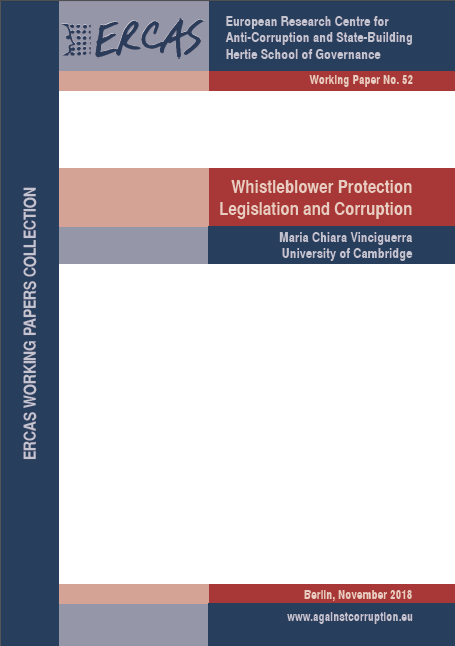 Following the “Snowden effect” and more recent whistleblower scandals, such as the Panama Papers, Luxleaks, Cambridge Analytica or the Danish Tax Fraud, the number of whistleblowing cases and laws for the protection of whistleblowers in Europe and around the world has significantly increased as a tool to combat corruption, fraud and organizational wrongdoings. This paper provides a theory-based and empirical analysis of the theory of change behind whistleblower protection legislation as an anti-corruption policy tool. By introducing a new indicator developed in collaboration with ERCAS and based on international best practices on whistleblower laws – the Whistleblower Index (WI) – the report shows that there is only a slightly upward interaction between stronger whistleblower laws, as of the WI, and slightly higher levels of WGI’s Control of Corruption. It also did not find a statistically significant change in WGI’s Control of corruption after the introduction of a specific whistleblower protection law. Based on the empirical analysis carried out for this study, whistleblower protection legislation only seems to be effective in deterring corruption and organizational wrongdoings in a governance system based on ethical  universalism and absence of captive media.